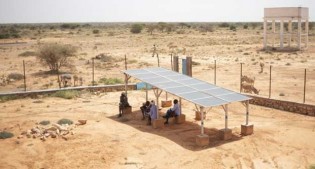 By Franck Kuwonu
Rondrotiana Barimalala is a climate researcher at the University of Cape Town in South Africa and a lead author for the IPCC report to the recently released Intergovernmental Panel on Climate Change (IPCC) report titled Climate Change 2021: The Physical Science Basis.

By Franck Kuwonu
Central African Republic and in Niger held their presidential and parliamentary elections on 27 December 2020 to round up a challenging year where despite fears of disruption from the COVID-19 pandemic, most countries in Africa managed to stick to their scheduled elections.

By Franck Kuwonu
Re-opening economies is a tough balancing act between keeping people safe from the virus while ensuring they can still make a living. Some four months after the first COVID-19 case in Africa was reported in Egypt, countries on the continent are beginning to ease public health and social measures, such as lockdowns and curfews, imposed to curb the spread of the pandemic.

By Franck Kuwonu
It is a cold evening in Antwerp, Belgium’s second-largest city, famous for diamonds, beer, art and high-end fashion. Inside a small restaurant, a mix of the latest American pop and rap—clearly enjoyed by diners—is playing on a radio. Nigerians Olalekan Adetiran and Adaobi Okereke, enjoying a kebab dinner, are startled when the radio begins playing the unmistakable “Ma Lo”—a catchy, midtempo and bass-laden song by popular Nigerian artistes Tiwa Savage and Wizkid.

By Franck Kuwonu
A few years ago, more than half a century after the concept was first proposed, the government of Côte d’Ivoire completed construction of the Henri Konan Bédié Bridge, a span over the Ébrié Lagoon linking the north and south of Abidjan, the country’s main city. The project became a reality after the government received development bank and private capital financing.
ADVERTISEMENT ADVERTISEMENT