Stories written by Jim Lobe
Jim Lobe joined IPS in 1979 and opened its Washington, D.C. bureau in 1980, serving as bureau chief for most of the years since. He founded his popular blog dedicated to United Stated foreign policy in 2007. Jim is best known for his coverage of U.S. foreign policy for IPS, particularly the neo–conservative influence in the former George W. Bush administration. He has also written for Foreign Policy In Focus, AlterNet, The American Prospect and Tompaine.com, among numerous other outlets; has been featured in on-air interviews for various television news stations around the world, including Al Jazeera English; and was featured in BBC and ABC television documentaries about motivations for the U.S. invasion of Iraq. Jim has also lectured on U.S. foreign policy, neo-conservative ideology, the Bush administration and foreign policy and the U.S. mainstream media at various colleges and universities around the United States and world. A proud native of Seattle, Washington, Jim received a B.A. degree with highest honours in history at Williams College and a J.D. degree from the University of California at Berkeley’s Boalt Hall School of Law. | Web | Facebook | 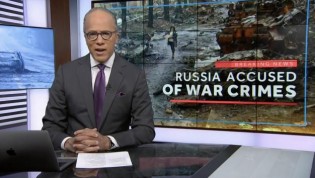 By Jim Lobe
The evening news programs of the three dominant U.S. television networks devoted more coverage to the war in Ukraine last month than in any other month during all wars, including those in which the U.S. military was directly engaged, since the 1991 Gulf War against Iraq, according to the authoritative Tyndall Report. The only exception was the last war in which U.S. forces participated in Europe, the 1999 Kosovo campaign.

By Jim Lobe
The ongoing war in Yemen, called the world’s “worst humanitarian disaster” by the United Nations and independent aid agencies since early last year, received a grand combined total of 20 minutes of coverage on the ABC, NBC, and CBS weekday evening news programs in 2018.

By Jim Lobe
Except for the ongoing war in Syria, coverage of the Middle East by the evening news programs of the three big U.S. networks virtually disappeared in 2017, according to the latest annual compilation by the authoritative Tyndall Report.

By Jim Lobe
The most frightening commentary I’ve read in the run-up to the inauguration—and there have been many—appeared in a column identifying the four people whose foreign policy ideas were likely to be most influential with the then-president-elect. It was written by The Washington Post’s Josh Rogin and entitled “Inside Trump’s Shadow National Security Council.”

By Jim Lobe
Will a President Trump intend to put U.S. business first and preserve and expand the U.S. manufacturing workforce as part of his plan to make America great again? Or will he hold to the reflexive anti-Iran positions of the Republican Congressional majority, Sheldon Adelson, and the neoconservatives, including the NeverTrumpers who, with Democrats marginalized across the board, are already seeking ways to gain influence with whomever the president-elect chooses to advise him?

By Jim Lobe
A federal jury here Wednesday convicted one former Blackwater contractor of murder and three of his colleagues of voluntary manslaughter in the deadly shootings of 14 unarmed civilians killed in Baghdad’s Nisour Square seven years ago.

By Jim Lobe
Most of the world’s governments are taking measures to reduce the worst and most hazardous forms of child labour, according to a major report released here Tuesday by the U.S. Labour Department.