Stories written by Joan Erakit
Joan Erakit is an American writer and journalist currently based in New York. As a United Nations correspondent with IPS, she covers women's issues specifically related to gender equality and health. Joan attended Bethel University in St. Paul, Minnesota, where she studied cultural anthropology and worked as a freelance writer. 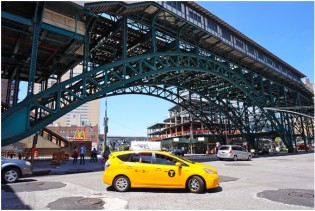 By Joan Erakit
On a busy Friday afternoon, the number 1 subway train heading north through Manhattan’s Westside comes out of a dark tunnel --and if one takes a minute to release oneself from communication devices—one can catch sight of the approaching 125th street in the distance, the crosswalk buzzing with yellow cabs.

By Joan Erakit
The United Nations Tuesday commemorated World Humanitarian Day paying tribute to aid workers who risk their lives to bring relief to those in need.

By Joan Erakit
A new report launched Wednesday alluded to the role renewable energy could play in improving energy security while also acting as a way to mitigate greenhouse gas emissions.

By Joan Erakit
As UN member states contemplate the important additives for the Post 2015 Development Agenda, health organisations are lobbying for investments in midwifery, a service experts believe could provide up to 90 percent of the care needed for newborns and pregnant mothers at the time of birth.

By Joan Erakit
In the aftermath of the deadly Typhoon Haiyan that hit the Philippines in November of 2013, recovery efforts are slowly making themselves visible—a feat that the Children’s Rights & Relief Organisation (UNICEF) has been pushing for.

By Joan Erakit
When you walk through downtown Medellin on a hot Saturday night, it is a common sight to see throngs of people sitting on sidewalks, milling outside make-shift tech stores that sell calling cards, chargers and other cell phone accessories.

By Joan Erakit
Amidst the backdrop of plush green forestry and winding roads that curved around each hilltop, participants from all over the world gathered in the city of Medellin, Colombia Monday for the seventh session of the World Urban Forum (WUF7).

By Joan Erakit
In an effort to leverage the power of partnerships and assist in the creation of an equitable world for women and girls in developing countries, non-profit organizations and UN agencies are turning to mentoring in business. UN Women’s Knowledge Gateway for Women’s Economic Empowerment and the Cherie Blair Foundation’s Mentoring Women in Business Programme have agreed on a 12-month initiative that will provide opportunities for women through a range of projects.

By Joan Erakit
The topic of natural resource management posed a critical question during the current 58th session of the Commission on the Status of Women (CSW): how can women utilize their knowledge for managing natural resources to promote peace and develop themselves?

By Joan Erakit
An East Harlem neighbourhood was shaken Wednesday morning when an explosion erupted and two buildings collapsed on 116th street and Park Avenue in New York City (NYC).

By Joan Erakit
The United Nations Populations Fund (UNFPA) and the World Bank are partnering to oversee strategies to address gender based violence through the lens of education, capacity building and economic growth.

By Joan Erakit
In its continued effort to highlight the achievements of women, United Nations Women for Peace (UNWFP), in partnership with United Nations Alliance of Civilization (UNAOC), convened Friday the ‘March in March’, an annual awards luncheon and rally to celebrate International Women’s Day.

“The Power of Collaboration” – Women Aim for Leadership Roles through Dialogue

By Joan Erakit
Last September, , IMPACT Leadership 21, an organisation geared towards promoting the visibility of women in leadership roles called for the appointment of a woman as the next UN Secretary-General, a first in the history of the world body.

U.N. Alliance of Civilizations Stands by its Support for Youth-Led Projects

By Joan Erakit
In 2008 the United Nations Alliance of Civilizations (UNAOC) established the Youth Solidarity Fund (YSF) in a way to support young people through an international grants-making programme. Seven years later, YSF continues its work by providing seed funding to youth led organizations that focus on fostering dialogue on cross cultural issues and bridging gaps between communities both locally and globally.

By Joan Erakit
As violence rips through South Sudan and ongoing conflict plagues the Central African Republic and Syria, developing countries stand at a difficult crossroads – struggling to grow economically and politically, yet fielding deep inequalities within their own borders.

By Joan Erakit
On 5 April 2014, the 7th World Urban Forum (WUF7) will descend on Medellin, Colombia on the theme ‘Urban equity in development’ — Cities for life.’ The focus of the weeklong conference , in the Latin American hub,  will be on practical and sustainable ways of creating more inclusive and compact cities that address complex issues like inequality, population and infrastructure.
Next Page »
ADVERTISEMENT ADVERTISEMENT