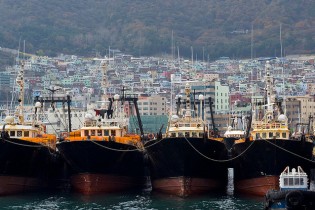 By John Feffer
The NATO summit that took place at the end of last week in Wales was supposed to celebrate the end of a long, draining war in Afghanistan. But with the presidential election still up in the air in Kabul, NATO couldn’t enjoy its “mission accomplished” moment.

By John Feffer
U.S. Vice President Joe Biden wrapped up his finger-wagging tour of Asia on Friday, with a busy week of lecturing the Chinese, trying to get the South Koreans and Japanese to play nice with one another, and damning North Korea with faint praise for releasing an 85-year-old American after more than a month of detention.

By John Feffer
In his 2007 bestseller The World Without Us, journalist Alan Weisman describes a planet that regenerates itself after the disappearance of human beings. Skyscrapers crumble and bridges collapse into rivers, but the primeval forests take over and the buffalo return to roam.

By John Feffer
They are unpopular all over the world, with one exception. According to a new Pew Research Center poll, the only country where a majority of citizens support drone strikes is the country that uses the new technology most regularly: the United States.

By John Feffer
It's not an easy time for the North Atlantic Treaty Organization (NATO).

By John Feffer
It's a deal that's been more than 15 years in the making and the unmaking. The United States and Japan have been struggling since the 1990s to transform the U.S. military presence on the island of Okinawa, the southernmost prefecture of Japan.

By John Feffer
In early February, Iran launched its third successful commercial satellite in three years. The Barack Obama administration, the United Nations, and the news media barely acknowledged the accomplishment. North Korea, on the other hand, has created a furor each of the three times its satellites failed to reach orbit.

By John Feffer
After three years of frozen relations between North Korea and the United States, the two longstanding adversaries are on the verge of a thaw.

By John Feffer
After three years of frozen relations between North Korea and the United States, the two longstanding adversaries are on the verge of a thaw.

By John Feffer
When Hu Jintao took over as the leader of China in 2002, U.S. companies welcomed his accession as a "good sign for American business"." Political analysts described Hu as a member of the fourth generation of Communist party leadership who might very well turn out to be a "closet liberal".
Next Page »
ADVERTISEMENT ADVERTISEMENT