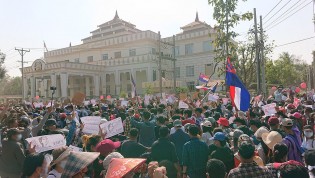 ‘Super’ Cabinet Seeks to Save Myanmar

By Larry Jagan
After months of speculation and rumours, President Thein Sein of Myanmar (earlier Burma) has created a “super” cabinet to try to salvage his besieged administration – riven with divisions and inertia. Currently he is embroiled in a constitutional crisis – a battle for power between the president and the parliament – that threatens to paralyse the government until it is resolved. This has left the president increasingly isolated, with only the army offering concrete support.

By Larry Jagan
Already Burma’s new civilian government poses problems for its Asian allies as it tries to woo the international community. The month-old quasi-civilian administration, led by President Thein Sein has launched a new diplomatic charm offensive in an effort to get international approval for the cosmetic changes that have been introduced under the guise of a new civilian government.

By Larry Jagan
A new quasi-civilian government has taken over in Burma, but diplomats, analysts and pro-democracy activists are dismissing it as nothing more than "old wine in a new bottle".

By Larry Jagan
South-east Asian leaders did not push Burma’s junta too hard at their just- finished annual summit, hoping that a more subtle approach would nudge it to make sure the elections planned for later this year are credible.

BURMA: Ahead of Poll, Junta Prepares to Score Political Points

By Larry Jagan
As election fever grips Burma, the ruling junta is busy preparing a series of steps, including an amnesty of political prisoners, to try to make this year's vote more credible in the international community.

By Larry Jagan
Following a strict global carbon budget is the only way to ride out climate change — and this is as much the responsibility of developing countries as it is of developed ones.

By Larry Jagan
The border dispute between two close allies, China and Burma, has now been compounded by concerns over the junta’s future relations with the United States.

By Larry Jagan
Burma’s monks are silent but seething with anger two years after the brutal state crackdown on their revolution.

By Larry Jagan
The shift in the United States policy towards Burma has been met with mixed reactions, with few believing it will have an impact. But the South-east Asian state’s detained opposition leader has already endorsed Washington’s move to start talks with the reclusive regime.

POLITICS-BURMA: Junta Up to Its Old Tricks, Plays with the West

By Larry Jagan
Having released more than 7,000 prisoners in the last few days as part of the preparations for next year’s planned polls, Burma’s military rulers are up to their old tricks, according to Burmese activists and human rights groups.

By Larry Jagan
Aung San Suu Kyi is to spend another 18 months in detention as Burma’s military rulers try to make sure she cannot influence the planned election next year.

By Larry Jagan
Hundreds of Rohingya (Burmese Muslim) refugees are feared dead after being pushed back into the sea by Thai authorities, according to human rights activists based in Thailand.

By Larry Jagan
Burma’s military rulers have renewed efforts to eliminate all opposition to their authority in the lead up to planned elections in 2010.

THAILAND: Another Bout of Military Rule?

By Larry Jagan
The battle for Bangkok has entered a new and violent phase, the logical end of which can only be another bout of military rule.

By Larry Jagan
Burma’s military leaders have signaled the start of a new political era with the release of 9,002 prisoners, including several key political detainees.

By Larry Jagan
Disregarding the disaster caused by Cyclone Nargis, Burma’s military rulers are bent on holding a constitutional referendum on Saturday, said to be designed to enhance the junta’s grip over the country.

By Larry Jagan
Cyclone Nargis - Burma’s worst natural disaster in living memory - has reinforced the image of the military in that country as a force interested solely in perpetuating its grip on power, regardless of costs to the people it claims to protect.
Next Page »
ADVERTISEMENT ADVERTISEMENT