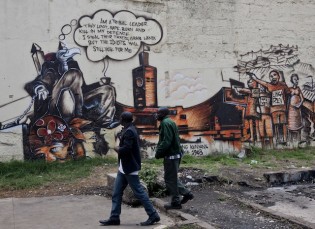 A new website linking corruption and other scandals to high-ranking Kenyan politicians, created by a team of political provocateurs, has become one of the most-visited web pages in the country.

By Mike Elkin
During an interview at the Hilton Hotel in downtown Nairobi, David Kuria Mbote, Kenya’s first openly homosexual candidate for public office, stresses that his campaign will not be only about gay rights.

By Mike Elkin
A year after the Libyan uprising that overthrew dictator Muammar Gaddafi, the National Transitional Council (NTC) has yet to provide adequate security. Many armed groups are still calling the shots, as the NTC moves to restore normalcy.

By Mike Elkin
With the June deadline for congressional elections approaching, Libyans previously in exile are returning home to take part in the construction of a new political landscape. Political churning is well under way as Libya marks the first anniversary of the ouster of the Muammar Gaddafi regime Friday.

New Libya Off to a Shaky Start

By Mike Elkin
It's been almost a year since Benghazi launched its uprising against former Libyan president Muammar Gaddafi and three months since he was killed, but there is a growing sense of frustration in eastern Libya with the National Transitional Council. Two weeks ago, a group of protesters attacked the Council’s Benghazi headquarters as chairman Mustafa Abdeljalil was inside, forcing him to flee through the back door.

EGYPT: ‘Army On Its Way Out’

By Mike Elkin
Egyptians in Cairo and Alexandria went to the polls on Monday in the first parliamentary elections since the January 25 protest movement drove former president Hosni Mubarak from a 30-year grip on power.
ADVERTISEMENT ADVERTISEMENT