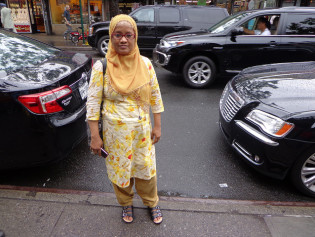 By Silvia Romanelli
With the Cambodian national assembly elections fast approaching on Jul. 28, local and international organisations are expressing concerns about the fairness and transparency of the electoral system.

By Silvia Romanelli
“We live in a world where billions of citizen witnesses have cameras in their pockets. The opportunities are endless to document human rights violations,” Chris Michael, head of training and partnerships at WITNESS, tells IPS.

By Silvia Romanelli
Seven in 10 U.S. citizens believe climate change is real and happening now. Yet most have never even contacted a government official about the issue, let alone volunteered with an environmental organisation or taken other action.

Migration: A Process, Not a Problem

By Silvia Romanelli
From 155 million in 1990, the number of migrants in the world today has reached 214 million, with “one in every seven persons on the globe…in a migratory status”, according to William Lacy Swing, director-general of the International Organisation for Migration (IOM).

By Silvia Romanelli
The global fight against malaria has now come down to a question of money, according to Jeffrey Sachs, the United Nations Special Advisor for the Millennium Development Goals (MDGs), whose 2015 target date is approaching fast.

By Silvia Romanelli
The need to restructure global economic governance in a more inclusive and effective way was stressed at a conference sponsored by the Permanent Mission of Kazakhstan, at the U.N.Headquarters in New York.
ADVERTISEMENT ADVERTISEMENT