Stories written by Suad Hamada
Suad Hamada is a freelance journalist with a passion for covering gender issues. She also writes about politics, human rights and the environment. Suad lives in Muharraq, Bahrain and her work is driven by a desire for women and girls in her hometown to achieve their full rights. 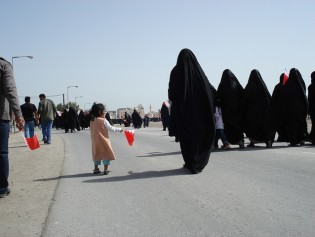 By Suad Hamada
A thirty-four-year-old Bahraini teacher, whose son was abused five years ago, has hitherto refused to tell anyone the story, afraid that she will be blamed for failing to protect her child who is now eight years old.

By Suad Hamada
Women activists in Bahrain have acknowledged their poor showing in the recent unrest as well as in efforts to fight sectarianism, and blamed it on rifts within their organisations.

By Suad Hamada
A national dialogue with no preconditions could bring the situation in Bahrain back to normal after a military crackdown that followed months of unrest.

By Suad Hamada
Women in Bahrain have launched new initiatives to tackle sectarian tensions that emerged as the fallout of widespread unrest sweeping the country since Feb. 14.

By Suad Hamada
Bahrain is considering slashing or putting on hold levies on businesses to help them cope with the deteriorating economy, with losses topping an estimated 500 million dollars since the beginning of unrest here in February.

By Suad Hamada
As protests in Bahrain continue, increasingly migrant workers are being victimised in violent hate crimes.

By Suad Hamada
Thousands of foreign labourers here are squeezed into houses the government says are uninhabitable, but they are unlikely to get any relief soon, with the non- stop protests in the capital hurting many businesses.

By Suad Hamada
Environmentalists are engaged in a nation-wide campaign to protect what is left of the agricultural belt in Bahrain. Seventy percent of farms have been eliminated due to urbanisation, according to environmentalists who are warning of a serious environmental crisis.

By Suad Hamada
The recent election of Bahrain’s first female municipal councilor is boosting hopes among women here that they are seeing the beginning of the end to gender-based voting in this country.

POLITICS-BAHRAIN: More Than A Matter of Putting Women in Office

By Suad Hamada
Women candidates seem to be getting scarcer in Bahraini elections, but women leaders here say female poll participation is no longer about getting into office.

BAHRAIN: No Change Seen in Ban on Entry of People with HIV

By Suad Hamada
Bahrain may be dependent on expatriate labour, but that has not stopped it from deporting migrant workers who are found to be HIV-positive.

By Suad Hamada
It was his second time to be caught stealing a car, so Turki was meted a jail term of five years. But the young repeat offender was only 17 years old at the time of his arrest, and therefore was still considered a minor under the United Nations Convention on the Rights of the Child.

By Suad Hamada
In her 30s, Muza has been married for years but has managed to remain financially independent. In fact, she was even able to help build the home she has with her husband, using the money she earned as a teacher.

By Suad Hamada
When Abdulkhaliq Mohammed arrived in Bahrain as a contract labourer 20 years ago, the first thing he did on setting foot in the oil-rich Gulf state was to hand his passport over to his employer.

By Suad Hamada
Surging dowries and the skyrocketing costs of living amid constricting economic opportunities made worse by the global financial crisis have placed a heavy burden on Bahraini men contemplating marriage.

By Suad Hamada
Bahrain has observed a de facto moratorium on the death penalty for years, but many are watching to see if the Gulf country will follow the international trend toward the abolition of capital punishment in the future.

BAHRAIN: Debate on Proposed Alcohol Ban Far From Over

By Suad Hamada
Legislators say it would encourage more Islamic behaviour and cure social ills, but critics say a complete ban by Bahrain on selling alcohol would mean big losses in tax revenues and lead to a black market in liquor.

By Suad Hamada
Cunning rapists in Bahrain can avoid victimising virgins so they could escape the maximum penalty provided by law, and those who force themselves on young girls can evade punishment by promising to marry their victims.

By Suad Hamada
Umbassil* is unlike other engaged women. Instead of planning her wedding she is wondering where she will have her baby. She is not pregnant but she knows that Bahrain's maternity hospitals will not admit her because she is HIV positive.

By Suad Hamada
Transsexuals in the Gulf call Bahraini lawyer Fawziya Janahi "guardian angel". She is the Arab world's only female lawyer who takes up cases on behalf of clients who want to change their sex.

By Suad Hamada
There is inequality in citizenship laws for women and men in the Gulf Arab states.
Next Page »
ADVERTISEMENT ADVERTISEMENT