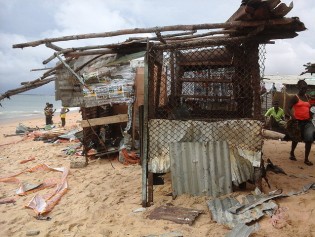 By Wade C. L. Williams
Fatou Nernee is scavenging through the debris of her home, which was razed to the ground by bulldozers belonging to the Monrovia City Corporation in Liberia. She is looking for something to keep as a treasured memory of a place she called home for over 20 years.
ADVERTISEMENT ADVERTISEMENT