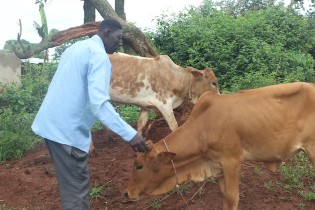 By Wambi Michael
Index insurance is being promoted as a solution to protect climate affected smallholder farmers in Africa. This type of micro insurance is slowly gaining ground as a way of compensating farmers for lost crops and livestock due to climate change.

By Wambi Michael
Lack of energy access presents a formidable challenge to Africa and lack of access to financing has been singled out as the biggest reason why over 620 million people living on the continent are stuck in energy poverty.

By Wambi Michael
Mayimuna Monica* has been living with HIV for over 10 years and wants to have a baby. But she can’t because her uterus was removed against her will at a government hospital where she had gone to deliver her last child now aged eight. “My uterus was removed in 2007. When I got pregnant and went for medical check-up, the doctor asked me why I was pregnant. I told him I want to have a third child. The doctor said, you people living with HIV at times annoy us because you understand your situation but you come to disturb us.” Mayimuna narrates.

By Wambi Michael
After years of a protracted battle against Uganda’s “bride price” practice, the country’s Supreme Court this week ruled that husbands can no longer demand that it be returned in the event of dissolution of a customary marriage but has stopped short of declaring the practice itself unconstitutional.
Next Page »
ADVERTISEMENT ADVERTISEMENT