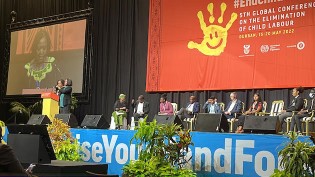 By Sweta Akundi
At a healthcare clinic in Thodathara, a village in the Thavanampalle mandal near Chittoor, Andhra Pradesh, Dr Vijay Kumar calls in his next patient. “He is the most disciplined man I know,” Dr Kumar says with a hint of pride.

By Baher Kamal
The world's leading health and children specialised organisations have once again sounded the alarm bell about what they classify as “shocking, insidious, exploitative, aggressive, misleading and pervasive” marketing tricks used by the baby formula milk business with the sole aim of increasing, even more, their already high profits.

By Riya Shah and Arjun Kumar
When the Covid- 19 pandemic first broke out in Wuhan in 2020, no one imagined that it would wreak havoc on such a large scale. With over 6.2 million lives lost, countless infected and new variants emerging, the pandemic is still raging all around the world.

By Johnpaul Omollo and Taonga Chilalika
Across Africa, local manufacturing and pharmaceutical companies are responding to the urgent need for locally produced medical products and technologies despite the existing regulatory challenges. We can support manufacturing capacity by expediting the establishment and operationalisation of the African Medicines Agency (AMA).

By Simone Galimberti
The recently disseminated Zero Draft Ministerial Declaration of the High-Level Political Forum on Sustainable Development (HLPF)-- the main UN event to track the member states’ progress to achieve the Agenda 2030 slated to be held in the first half of July-- is a disappointment.
Next Page »

The growth in the world population’s life expectancy and healthy life expectancy since 2000 demonstrate the significant strides that have been made in healthcare. This has required increasing efforts to understand health concerns and collaborations between the world’s health experts to combat terminal illnesses and conditions. Yet, the disparity in access to essential health services and coverage remains a cause for concern, especially among low- and middle-income communities.

The COVID-19 pandemic continues to be test for our modern times. This ongoing crisis has exposed vulnerabilities in our healthcare systems and countries’ capacity to deal with them. As of November 2021, there have been over 250 million confirmed cases globally. The World Health Organization (WHO) has stood as an information sharing and monitoring resource over the situation, giving crucial insight into its spread worldwide.

IPS is dedicated to reporting ongoing developments in the health sector across the world and the global south. With the dedication of its journalists located across the globe, IPS explores health issues and their impact on underserved populations.