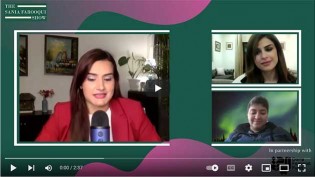 By Nayema Nusrat
As the global gathering for gender equality, the Generation Equality Forum, kicks off in Paris on June 30, 2020, IPS conducted an exclusive interview with Katja Iversen.

By Sania Farooqui
What is the first thing that comes to your mind when you read the words, women and power? The accepted wisdom is that women can be powerful, but not without the constant reference to their gender - which is often based on a set of unconscious biases towards them. Is she competent enough, effective, articulate without being too assertive or too aggressive. Is she a straightjacket, is she too emotional, will her family life impact her work or vice versa. Is she smart enough to camouflage her intelligence, is she ready for a key position, is it worth making her powerful?

By Sania Farooqui
Four women, two motorbikes, 64 districts and a journey of a lifetime, this is the story of Dr. Sakia Haque from Bangladesh. In November 2016, Dr Haque co-founded “Travelettes of Bangladesh - Bhromon Konya,” a women's only group, with the motto of “empowering women through travelling.” This platform is not just an ordinary online travel group, but it is a platform of connection, sisterhood and networking of almost 60,000 girls and women in Bangladesh that empowers them by teaching them to raise their voices and encourages them to step out of their comfort zones and to “go see the world”.

By Sania Farooqui
On 12 January this year, somewhere in the outskirts of the capital, New Delhi, 24 year old Dalit activist Nodeep Kaur was arrested by the Haryana police for protesting outside a factory. During the lockdown in 2020, Nodeep joined a local workers’ rights organization called Mazdoor Adhikar Sangathan (MAS) in the Kundli Industrial Area in Haryana. In January Nodeep was accused of allegedly manhandling management and staff of an industrial area during a protest and also assaulting the police team.
Next Page »