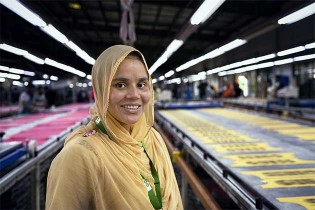 By Belen Sanz and Patricia Cortes
International Equal Pay Day, observed officially by the United Nations on 16 September, aims to draw attention to the gender pay gap – the difference between what a woman earns compared to a man for work of equal value – and the systemic inequalities it is rooted in.

By Baher Kamal
While women in rich societies are paid around 25% less than men for equal jobs, those living in impoverished countries receive by far much lower salaries, if any at all.

By Jemimah Njuki
Agnes Opus sells cereals in Busia, the border town between Kenya and Uganda. This is her lifeline through which she caters for her immediate family’s needs from school fees to housing and medical care and support to her extended family. While she dedicates all her energy and time to this work which she loves, she struggles to meet all her needs. She faces many non-tariff barriers including harassment by officials and unclear and ever-changing information on trade requirements.

‘Longings’ Of Ana of Galilee: Voice of Everywoman, Everywhere, And in Every Age!

By Iftekhar Ahmed Chowdhury
The American author Sue Monk Kidd's award-winning novel The Book of Longings has a sensational beginning, despite the simplicity of the phraseology: It starts: "I am Ana. I was the wife of Jesus bin Joseph of Nazareth". It would be impossible for anyone not to swallow this bait with enormous curiosity, and follow through with reading what is well and truly a 'page-turner'. The book is crafted to be breezy and exciting, necessary perhaps to better deliver its message. This historical work of fiction was the subject of discussion at a recent seminar organized by the Dhaka -based 'The Reading Circle'. The event was held in a 'hybrid' format, an experiment of the Circle in consonance with the evolving practices of the Covid era. There was a core of participants in Dhaka, and other members joining in from London, Paris, and Singapore. Chaired by Professor Razia Khan, the list of speakers and commentators included Niaz Zaman, Nusrat Huq, Tanveerul Haque, Ameenah Ahmed, Shahruk Rahman, Asfa Husain, Nazmun Nahar, Sarazeen Ahana and myself. The following essay is based on my remarks made on the occasion.

By Angelika Arutyunova and Leila Hessini
Feminist movements are powerful, and donors who want to contribute to solving the biggest challenges facing the world today, should fund them deeply, and without restrictions. Research by Htun and Weldon back this up, showing that globally, feminist movements have been some of the biggest drivers of progressive social change.

The under-representation of women in research is well documented. Emerging evidence suggests that the COVID-19 pandemic has exacerbated this inequality and disrupted the research enterprise globally.
Next Page »