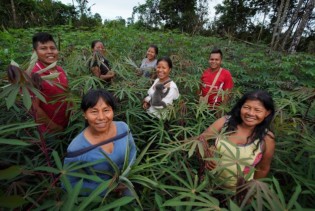 By Baher Kamal
Every now and then, experts remind that the Indigenous Peoples are the best (and last?) custodians of the essential web of life: biodiversity.

By Leslé Jansen
On the battleground that has become African wildlife conservation, rural communities find themselves in the middle of a tug-of-war that is bound to the past on one side, and their future, on the other.

Alarm: Every Two Weeks a Mother Tongue Disappears Due to Globalisation

By Baher Kamal
“Every two weeks a language disappears taking with it an entire cultural and intellectual heritage. At least 43% of the estimated 6000 languages spoken in the world are endangered. Only a few hundred languages have genuinely been given a place in education systems and the public domain, and less than a hundred are used in the digital world.”

By Emilio Godoy
One element that runs through all social movement climate summits is their rejection of the official meeting of the United Nations Framework Convention on Climate Change (UNFCCC) and the low ambition of its outcomes - and the treaty's 26th Conference of the Parties (COP26) was no exception.
Next Page »

The planet's roughly 350 million indigenous peoples took notable steps on the international stage in the last decade. They got the world's governments to agree to create a body to represent them at the United Nations, the Permanent Forum on Indigenous Issues, and to appoint a special rapporteur responsible for their human rights. In 2007 a Universal Declaration on the Rights of Indigenous Peoples was approved by the UN. Yet the living conditions of most "tribal", "aboriginal", "native" or "first" peoples remain precarious. IPS, with its network of contributors at the UN and linked to indigenous communities worldwide, is committed to tracking the world community's efforts to do justice to the rights and aspirations of these peoples, with a special current focus on Latin America's 40 million rural indigenous peoples.