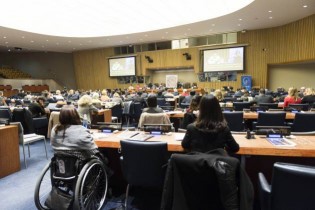 By Pius Adeleye
For eight months, the halls of Nigeria's universities and colleges remained silent – the result of a lecturers' strike brought upon by a wage and conditions of service dispute.

By Esther Ngumbi
The statistics are stark. The crisis is unprecedented. Yet again, according to the United Nations, famine looms in Somalia, with hundreds of thousands already facing starvation. In addition, droughts, and catastrophic hunger levels have left over 500,000 children malnourished and at risk of dying. This is already nearly 200,000 more than the 2011 famine. Urgent immediate actions must be taken now, both to address the crisis in the short-term and long-term.

Droughts Don’t Need To Result in Famine: Ethiopia and Somalia Show What Makes the Difference

The Horn of Africa is facing its worst drought in 40 years. Scientists suspect that a multi-year La Niña cycle has been amplified by climate change to prolong dry and hot conditions.
Next Page »
ADVERTISEMENT ADVERTISEMENT