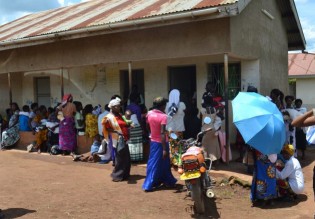 By Claude Mambo Muvunyi
Since the outbreak of the COVID-19 pandemic, healthcare systems globally have battled to deal with the repercussions unleashed by the disease. From the outset, Africa was considered particularly vulnerable due to several factors: limited healthcare provision in some areas, high prevalence of HIV and TB in a number of countries, and limited fiscal room to respond to the pandemic’s financial impacts.

By Ifeanyi Nsofor
For forty days, Kunle Adeyanju – a Nigerian, Rotarian, polio eradication advocate and biker - rode for more than 12,500km from London to Lagos to raise funds for polio eradication.

By Baher Kamal
In addition to slave selling and buying deals in public squares, as reported time ago in ‘liberated’ Libya, a widespread exploitation of men, women, and children has been carried out for years at refugee camps worldwide.

By Tal Harris and Raphaël Mavambu
Nine of the 16 oil blocks to be auctioned in the Democratic Republic of Congo (DRC) next month overlap Protected Areas, according to a review of official government maps by Greenpeace Africa.

By Quarraisha Abdool Karim
Africa is plagued by many epidemics — from tuberculosis and HIV/AIDS to malaria and wild polio — but the continent has also worked for decades to fight these threats. The key to beating these deadly diseases is turning inward to existing expertise and finding locally driven solutions.

By Ibrahim Thiaw
Land is our lifeline on this planet. Yet ‘business as usual’ in how we manage land resources puts our own future on planet Earth in jeopardy, with half of humanity already facing the impacts of land degradation.

By Lyse Comins
Selimatha Dziedzorm Salifu was just seven years old when she went to work for the first time to support her family. Born in the fishing village, Kpando-Torkor, in Ghana, Salifu, was forced to go out and work in the local fishing industry when her father Seidu died, leaving her mother, Mary, with six children to feed, clothe and shelter. The industry is well documented for child slavery and trafficking.
Next Page »
ADVERTISEMENT ADVERTISEMENT