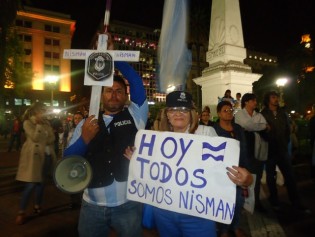 By Gareth Porter
Alberto Nisman, the Argentine prosecutor who was prevented by Argentine President Cristina Kirchner from testifying before a U.S. House subcommittee investigating alleged Iranian terrorist networks in the Americas here this week, claimed in a recent report that Tehran was involved in a 2007 plot to blow up fuel tanks at New York's John F. Kennedy Airport.

By Marcela Valente
Despite the government's insistence that the purpose of the agreement struck with Iran is merely to investigate the 1994 bombing of the Jewish institution AMIA, as the Argentine parliament voted its ratification, discussions focused on geopolitics and the country's position in the changing international scenario.

By Marcela Valente
An agreement between Argentina and Iran to dig deeper into a 1994 bomb attack on a Jewish community centre in this city will test the solidity of the evidence garnered by a judicial investigation that has ground to a halt because of lack of cooperation from Tehran.
ADVERTISEMENT ADVERTISEMENT