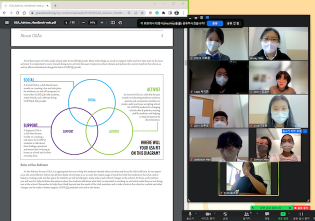 By Cecilia Russell
Most families in the Republic of Tajikistan were affected when economic migrants were caught up in the COVID-19 pandemic abroad, Dr Vazirov Jamshed, research consultant for Asian Forum of Parliamentarians on Population and Development (AFPPD), told a webinar on the impact of the pandemic on youth.

By Cecilia Russell
More than eight million people moved onto the poverty line in the Arab region, a conference of Arab and Asian parliamentarians heard. The hybrid conference, held simultaneously in Beirut, Lebanon, and via video conferencing to delegates in Asia and the Arab region, was a follow up on earlier discussions on the regions' ICPD25 Commitments.

Extent of Violence Against Women During Pandemic Exposed

By Cecilia Russell
COVID-19 restrictions exposed women and girls to heightened abuse – revealing the conditions in which gender-based violence became the shadow pandemic on the continent, a recent webinar attended by parliamentarians from Africa and Asia heard.

By Cecilia Russell
Internationally COVID-19 extracted a heavy toll on older people – raising concerns in the Asia Pacific region where more than half of the world’s ageing population live.

By Cecilia Russell
Innovative financing to resolve COVID-19 crisis was needed, a joint African and Asian parliamentarians’ webinar heard this week. The webinar, facilitated by Asian Population and Development Association (APDA), was aimed at enhancing support for the implementation of International Conference on Population and Development (ICPD)commitments in the face of the pandemic.

By Cecilia Russell
Japan should step up and play a role as a global facilitator for equitable access to COVID-19 vaccines, Dr Daisaku Higashi said at a recent Japan Parliamentarians Federation for Population (JPFP) study meeting.
Next Page »
ADVERTISEMENT ADVERTISEMENT