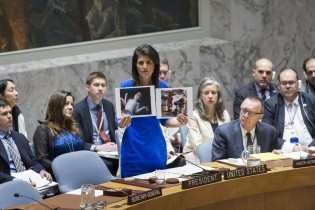 This week’s video-taped beheading of a U.S. journalist by the Islamic State of Iraq and al-Sham (ISIS) has spurred renewed calls for President Barack Obama to broaden Washington’s military efforts to strike the terrorist group, including in Syria.

By Pierre Klochendler
The faint explosion is a reminder that though the newly refurbished fence protects their town, the two-and-a-half-year-old civil war which is tearing their motherland apart is never far off.

By Mark Fitzpatrick
As if the Iran nuclear issue was not already difficult enough, it became even more complicated when Bashar al-Assad unleashed his chemical weapons across Damascus suburbs last month. Suddenly, the Syria issue is overshadowing all other factors concerning Iran.

By AJ Correspondents
World leaders from G20 are meeting in St Petersburg, Russia, amid sharp differences over possible U.S. military action against Syria in response to what the U.S. administration calls a deadly chemical weapons attack by the Syrian government.
Next Page »
ADVERTISEMENT ADVERTISEMENT