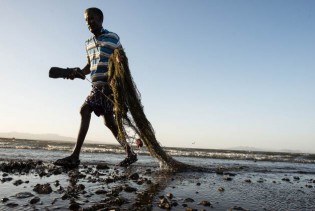 A Pragmatic Shift Needed, to Deliver the Potential of Blue Economy

By Ngele Ali
It's estimated that 70% of the Earth’s surface is covered by water. Unfortunately, our water resources are under serious threats attributable to uncontrolled human activities that are severely impacting livelihoods and the ecosystem.

By Gordon Radley
Every winter dozens of bull sharks come to Mexico’s Mayan Riviera to breed. A single bull shark can give birth to up to 15 young. They are the only species of shark that can live in both fresh and salt water.

By Andrew Norton
The world’s first efforts to develop a way to govern the high seas – international waters beyond the 200 nautical mile national boundary – is truly underway. The initial round of negotiations at the United Nations has just ended after two weeks of talks.

By Emilio Godoy
Fishermen are scarce in the Klamath River delta, unlike other fishing season, because climate change has driven up water temperatures which kills off the salmon, the flagship species of this region in northern California.
Next Page »