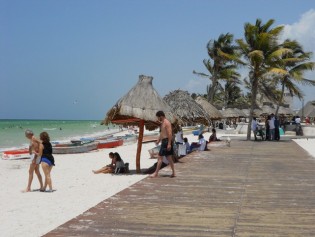 By Emilio Godoy
Towns on Mexico’s Caribbean coast are behind schedule on the design and implementation of plans to face the challenges of climate change, in spite of the urgency of measures to reduce vulnerability.

By Edgardo Ayala
Armed with chainsaws, machetes and shovels, local residents of El Salvador’s Lower Lempa River Basin, near the Pacific Ocean, are unblocking the flow of rivers and pruning the branches of trees on riverbanks to keep them from falling into the chocolate-colored water.

By Zadie Neufville
A growing appetite for oil and some of the Caribbean region's highest electricity rates and petroleum prices are driving Jamaica's thrust toward clean energy alternatives.

By Zadie Neufville
A public awareness project that aims to foster wider understanding among locals about the linkages between the global climate and their social and economic wellbeing is Jamaica's newest adaptation strategy.

By Peter Richards
As developing countries urgently seek new sources of financing to cope with problems linked to climate change, delegates from the nine-nation Organisation of Eastern Caribbean States (OECS) met here last week to evaluate potential funds and outline a more concrete vision of what is required for the subregion.

By Isaiah Esipisu
On a steep slope of land in Thangathi village in Central Province, Kenya, Peter Nyaga surveys his four-year-old eucalyptus woodlot. He calculates the value of every tree on his two-hectare piece of land at maturity in three years.

By Zadie Neufville
As increasingly extreme and erratic weather driven by the earth's changing climate exacts a heavy toll on Jamaica's population, economy and infrastructure, a consensus has emerged among scientists and policy makers here that adaptation measures must include hazard mitigation.

By Isaiah Esipisu
For the Laibon community, a sub-tribe of Kenya's Maasai ethnic group, the 33,000-hectare Loita Forest in the country's Rift Valley Province is more than just a forest. It is a shrine.

By Tim Ash Vie
As climate talks get underway in Durban, South Africa this week, progress on a Green Climate Fund is one of the hottest, most contentious tickets in town. It is also one of the great prizes to be won.

By Athar Parvaiz
Sammad Sheikh of Tangchekh village in north Kashmir cannot understand why the rice fields that his family cultivated for generations are drying up.

By Emilio Godoy
The foreseeable absence of binding agreements to stabilise the global climate could give rise to increased regional cooperation to help Latin American countries adapt to the severe effects of climate change.

By Kristin Palitza
South Africa’s Rooibos tea has become a popular drink all around the globe. But prices of the herbal brew could shoot up within the next decade, as the Rooibos plant can only grow in one small region in the world – which is severely affected by climate change.

By Isaiah Esipisu
When donor-funded horticultural projects failed in Kalacha village at the edge of the Chalbi Desert in North Eastern Province, Kenya, the local pastoralist community proposed their own idea, which turned out to be the solution to their problems.
Next Page »

How can climate change provide opportunities for developing countries? IPS reports from across the South on key risks, trade-offs and political challenges to coping with the changing environment.

This page includes independent IPS news coverage that is an output from a project funded by the UK Department for International Development (DFID) for the benefit of developing countries. However, the views expressed and information contained in it are not necessarily those of or endorsed by DFID, which can accept no responsibility for such views or information or for any reliance placed on them.