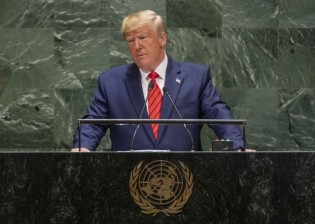 By Farhang Jahanpour
American democracy has survived a dangerous virus, and it has even come off the ventilator, but whether it will be restored to full health or will suffer for a long time (like a long Covid) from the negative effects of the virus of personality cult, chauvinism, populism, racism, militarism and, yes let’s say it, fascism, remains to be seen.

Trump Is Gone, But Trumpism Remains

By Roberto Savio
Now it is clear that Joe Biden is the new president of the United States. It is unlikely that Donald Trump’s legal manoeuvring will change the election results, as when a conservative Supreme Court in 2000 decided in favour of George Bush over Al Gore, who lost by 535 votes.

By Roberto Savio
It is very likely that the idea of impeaching Donald Trump will be a boomerang. Trump fans are listening to a furious campaign which smacks of coup d’etat and call his accusers traitors who deserve to go to jail.

By Martin Khor
Global climate change policy is in a state of flux, with all other countries waiting for the United States to decide whether to leave or remain in the Paris Agreement.
Next Page »
ADVERTISEMENT ADVERTISEMENT