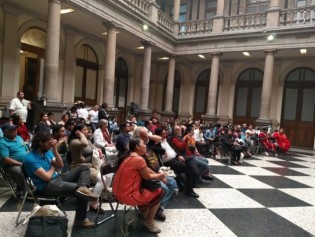 By Emilio Godoy
"We're in a very difficult situation. There is militarisation at a regional level, and gender-based violence. We are at risk, we cannot silence that," Aura Lolita Chávez, an indigenous woman from Guatemala, complained at a meeting of human rights defenders from Latin America held in the Mexican capital.

By Humberto Márquez
The murder of journalists and changing forms of censorship show that freedom of expression and information are still under siege in Latin America, particularly in the countries with the greatest social upheaval and political polarisation.

By Edgardo Ayala
Despite the aggression and abuse she has suffered at the University of El Salvador because she is a trans woman, Daniela Alfaro is determined to graduate with a degree in health education.
Next Page »
ADVERTISEMENT ADVERTISEMENT