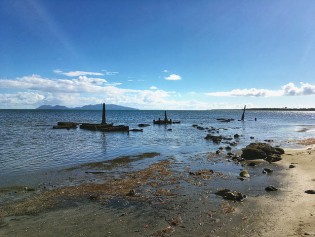 By Megan Darby
Civil society leaders from more than 100 countries called for action on climate-induced displacement at a summit in Suva, Fiji last week.

Are Rising Seas, Coastal Erosion & Powerful Storms a Wave of the Future for Small Island Nations?

By Thalif Deen
The 44-member Alliance of Small Island States (AOSIS) represents some of the world’s most vulnerable island nations fighting a virtually losing battle against rising sea levels triggered by global warming and climate change.

By Brooke Takala
A recent meeting in Rome between our Pacific leaders and UN Food & Agriculture Organisation (FAO) highlighted the urgency of food security in our region given the reality of climate change affecting our agriculture and aquaculture.

By Gillian Kane
Cancun, Mexico, of white sand beaches and spring break-style nightlife, was, this past June, the unusual backdrop for a regional gathering on human rights and democracy.

By Thalif Deen
The Pacific islands have long remained victims of nuclear crimes – but the perpetrators, three of the world’s major powers with permanent seats in the UN Security Council, never paid for their deadly sins.

By Ingrid Srinath
A cursory glance at international funding of the social sector in India reveals that it has grown at over 25% annually over the past three years.

By Mandeep Tiwana
At CIVICUS, a global civil society alliance working to strengthen citizen participation, we receive bad news of attacks on compatriots every day.

By Elisa Webster, CARE International and Julia Marango
It’s been dry in Isavai on the island of Aniwa for last couple of years – ever since Tropical Cyclone Pam tore through Vanuatu in March 2015, leaving an El Nino-induced drought in its wake. A dry phase is bad news for farmers anywhere, but in Aniwa, where there is no constant water source and the only water supply comes almost exclusively from harvesting rain into tanks, it’s disastrous.
Next Page »
ADVERTISEMENT ADVERTISEMENT