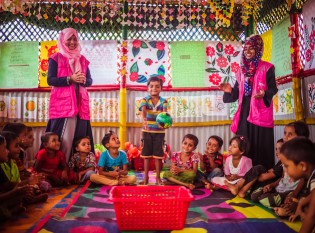 UN’s Battle Against Climate Hazards Undermined by a Devastating Pandemic

By Thalif Deen
The United Nations has been in the forefront of an ongoing battle against the growing hazards of climate change, including the destruction of different species of plants and animals, the danger of rising sea-levels threatening the very existence of small island developing states (SIDS), and the risks of oceans reaching record temperatures endangering aquatic resources.

By Thalif Deen
The coronavirus pandemic, which has claimed the lives of over one million people worldwide and destabilized the global economy, also upended the UN’s ambitious socio-economic goals, including the eradication of extreme poverty and hunger by 2030.

From Pledges to Policy and Practice: Moving Nature to the Heart of Decision-Making

By Ana María Hernández Salgar
This week, Heads of State and Government from 64 countries announced one of the strongest pledges yet to reverse the loss of biodiversity and nature’s contributions to people by 2030. Advancing from powerful pledges to concrete policy and action, however, means that nature must be moved to the heart of global, national and local decision-making. It’s time for nature to be reintegrated into everything we do.

On the eve of the United Nations Summit on Biodiversity, Dr. Anne Larigauderie calls on everyone to make ambitious commitments to protect #biodiversity and #nature.

Coral reefs are iconic, but we have all seen the images of bleached areas that were previously teeming with life and colour. These ecosystems, and more broadly coastlines, are a vital part of the efforts to protect biodiversity. So how are coral reefs doing? Are we too late? Can we still secure a better future for reefs and people? In this week’s episode, Brit talks to Dr. David Obura. David has studied coral reef resilience and adaptation his whole life. He founded CORDIO, a non-profit organisation specialising in finding solutions that benefit marine ecosystems and people. To find out more about IPBES, head to www.ipbes.net or follow us on social media @IPBES.

In the IPBES Global Assessment report, we learnt that to safeguard all life on Earth, we need transformative change. So what does that mean? How can we make it happen? This week's guest is Kai Chan. He is a professor at the University of British Columbia and one of the Coordinating Lead Authors of the Global Assessment. To find out more about IPBES, head to www.ipbes.net or follow us on social media @IPBES.

How do we incorporate different knowledge systems in the battle for biodiversity? Billy Offland set off on a 2-year journey to learn about conservation from as many different people as possible. In his travels, he met Dr. Anne Poelina in the Kimberley in Western Australia. Anne is a Nyikina Warrwa Traditional Owner and chair of the Mardoowarra Fitzroy River Council.What can we learn from the Fitzroy River Council? How do we create "forever industries"? How can we use this knowledge in global policymaking?Music: River Feeling by Kalaji (Mark Coles Smith)To find out more about IPBES, head to www.ipbes.net or follow us on social media @IPBES.

My name is Emma, I’m 10 years old, and I live in Canada. I am sharing this video with you, today, because I learned at school that my future – the future of all children – will be determined by what we do together today.

By Ana María Hernández Salgar
Restoring damaged ecosystems is vital to avoid the collapse of nature’s most valuable contributions to people, but International Day for Biological Diversity 2020 should also be a wake-up call about the importance of addressing our social, economic and systemic values, because it is these that are driving the destruction of nature.

COVID-19 Stimulus Measures Must Save Lives, Protect Livelihoods, and Safeguard Nature to Reduce the Risk of Future Pandemics

By Josef Settele, Sandra Díaz, Eduardo Brondizio and Peter Daszak
There is a single species that is responsible for the COVID-19 pandemic - us. As with the climate and biodiversity crises, recent pandemics are a direct consequence of human activity – particularly our global financial and economic systems, based on a limited paradigm that prizes economic growth at any cost. We have a small window of opportunity, in overcoming the challenges of the current crisis, to avoid sowing the seeds of future ones.
Next Page »
ADVERTISEMENT ADVERTISEMENT