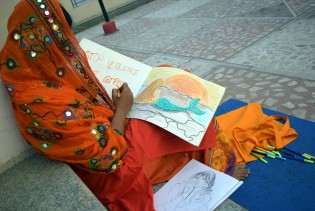 By Athar Parvaiz
The girl band in Kashmir was silenced; the male bands are running into fears of another kind of silence.

By Athar Parvaiz
“Give us his body; we want to give him a respectable burial…” this is the overwhelming demand across Kashmir following the hanging of Mohammad Afzal Guru who was convicted for his role in the attack on the Indian parliament on Dec. 13.  2001. Nine people died in the attack.

By Athar Parvaiz
Amid growing scepticism among Kashmiri people that the separatist leadership has lost relevance in the region’s fast-changing political landscape, the All Parties Hurriyat (Freedom) Conference – an alliance of separatist political parties and religious and social groups - is making a Herculean effort to reclaim some relevance in this disputed region.
Next Page »
ADVERTISEMENT ADVERTISEMENT