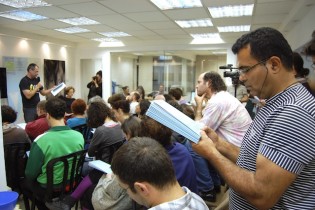 By Pierre Klochendler
At Dar el-Eitam Islamic Orphanage, a secondary school under Waqf (Islamic trust) supervision located in Jerusalem’s walled Old City, Palestinian twelfth graders prepare their Tawjihi (A-Level) in history. On the wall behind the teacher are two portraits of “martyrs” killed during the Second Intifadah uprising (2000-2005).
ADVERTISEMENT ADVERTISEMENT