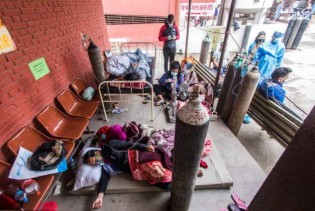 By Narayan Adhikari and Sanjeeta Pant
If you live in Nepal, a quick survey of friends and family will quickly prove how rapidly Covid-19 infection rates have spiked. For instance, out of 50 people we called last week, more than half had been infected, with the rest reporting that their extended families or colleagues had tested positive.

By Sonia Awale
The global pandemic hijacked 2020 and reset priorities, but countries now need to regroup and renew their commitment to cap global warming at well below 2°C above pre-industrial levels, as agreed in Paris in 2015.

By Marty Logan
“Reconstruction and reconciliation require finances and physical structure, but the families of the victims of the conflict first and foremost need their integrity protected. Physical and financial compensation mean little without justice,” wrote Suman Adhikari nearly 11 years ago, during a ceasefire in Nepal’s Maoist insurgency.

By Mallika Aryal
When 26-year-old Laxmi married into the Archaya household in Chhaimale village, Pharping, south of Nepal’s capital Kathmandu, she didn’t think she would be spending half the day in the kitchen inhaling smoke from the stove.
Next Page »
ADVERTISEMENT ADVERTISEMENT