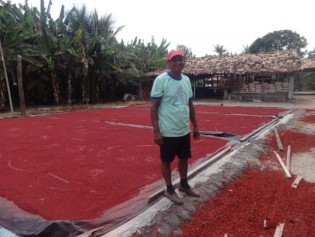 By Fabiana Frayssinet
Thousands of small farming families in Pará, in the Amazon jungle in northeast Brazil, have turned to the African oil palm as a new source of income, through contracts with biofuel companies. Strange bedfellows, which poses cultural and economic challenges.

By Fabiana Frayssinet
The green of the oil palm plantations is unbroken along kilometre after kilometre of red soil, devastated in the past by loggers and ranchers. The oil palm, a sign of alarm for some and of hope for others, is here to stay in the Amazon rainforest state of Pará in the extreme north of this country.