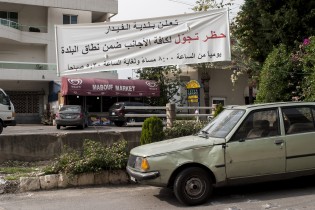 By Pierre Klochendler
Israeli settler Gadi Blumenfeld distributes machetes to 15 Palestinian labourers and instructs them to cut the thorns off of his dates’ fronds. “I might be stabbed in the back,” he says, “but thanks to farming, we keep the area safe from terrorists.”

By Jillian Kestler-D'Amours
The Israeli army is systematically using crowd control weapons and live ammunition unlawfully against Palestinians in the West Bank, signaling a widespread breach of military regulations and an alarming culture of impunity, a leading Israeli human rights group has warned.

By Jillian Kestler-D'Amours
Dozens of Israeli tanks slowly made their way south on the back of flatbed trucks along Israel’s Road 6 highway Sunday. Emblazoned with Stars of David and Hebrew letters, and carrying frayed Israeli flags, the movement of these tanks has left many believing that Israel will soon launch a large-scale ground operation into the Gaza Strip.

By Pierre Klochendler
Filistin Hamdallah looks disoriented, walking without purpose amidst the furniture strewn in the courtyard, as if she was moving home. Only the fresh laundry hanging on wires indicates that the Palestinian family is here to stay, to stay in conditions with Jewish neighbours that show just how difficult the divisions in Jerusalem can be.

By Jillian Kestler-D'Amours
Sitting in an airconditioned car along Road 60 in the heart of the occupied West Bank, Ovad Arad explained how he goes about his job: driving unannounced into Palestinian towns and villages, taking photographs, having coffee with families, and leaving almost as quickly as he arrived.

By Pierre Klochendler
A reserve soldier went on hunger strike in solidarity with Palestinian prisoners last week, vowing to surrender his citizenship and live as a Palestinian in a refugee camp; another activist was briefly jailed. They are Israel’s new dissidents. An e-book now comes to light, shedding light on their raison d’être.
ADVERTISEMENT ADVERTISEMENT