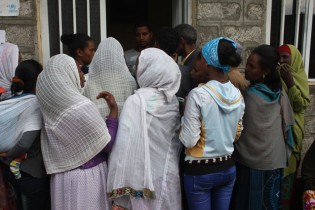 Ethiopia: The Biggest African Refugee Camp No One Talks About

By James Jeffrey
On a sunny November day in Addis Ababa the courtyard of the Jesuit Refugee Service (JRS) centre is packed with people—some attend a United Nations High Commissioner for Refugees reception clinic, others get essential supplies, while students attend classes, and many simply play volleyball, table football or dominoes to pass the time.

By Areej Abuqudairi
Watching videos and pictures on social media of the advance of the Islamic State (IS) inside Syria made it all seem far from reality to Iraqi Marvin Nafee.
ADVERTISEMENT ADVERTISEMENT