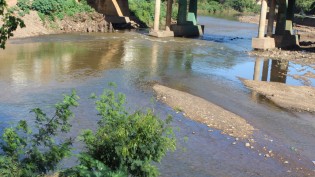 By Daniel Gutman
Is it possible to spend 5.2 billion dollars to clean up a river which is just 64-km-long and get practically no results? Argentina is showing that it is.

By Marianela Jarroud and Orlando Milesi
Three private sector initiatives are aimed at carrying water from the rivers in southern Chile to the arid north of the country by ship or through underwater or underground pipelines. The objective is to slake the thirst of the mining industry of this country, the world’s largest producer of copper.

By Mario Osava
José Geraldo Matos fondly recalls the massive traíras (Hoplias sp), carnivorous freshwater fish found in the lagoons and rivers of Brazil, that he used to catch in the Dos Cochos River just a few metres from his house.

By Edgardo Ayala
Armed with chainsaws, machetes and shovels, local residents of El Salvador’s Lower Lempa River Basin, near the Pacific Ocean, are unblocking the flow of rivers and pruning the branches of trees on riverbanks to keep them from falling into the chocolate-colored water.
ADVERTISEMENT ADVERTISEMENT