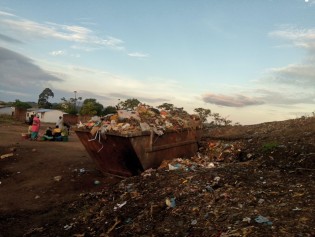 By Lee Middleton
Something unusual is happening in Atlantis. Created in the 1970s to fulfill the apartheid government's agenda to evict "coloured" South Africans from Cape Town, Atlantis has always been best known as the city that apartheid built.

By Kristin Palitza
The last hours of the 17th United Nations climate change summit in Durban have begun. Since the arrival of almost 150 ministers and heads of state on Tuesday, negotiations have moved to the political level. They are expected to debate the way forward until late Friday night, or even Saturday morning.

By Stephen Leahy
Countries at the United Nations climate change negotiations have publicly acknowledged their current pledges to reduce carbon emissions will not result in limiting global warming to less than two degrees Celsius.

By Kristin Palitza
Carbon pricing will be the core mechanism to finance the Green Climate Fund and with it climate change adaptation projects in developing countries.

By Kristin Palitza
The goal of a comprehensive and binding agreement may be beyond the reach of the 17th United Nations climate change negotiations, says the organisation's secretary-general Ban Ki-moon.

By Stephen Leahy
The United States has become the major stumbling block to progress at the mid point of negotiations over a new international climate regime say civil society and many of the 193 nations attending the United Nations climate change conference here in Durban.

By Busani Bafana
Negotiators at the 17th Conference of Parties owe it to the world's more than seven billion people to deliver a deal with a work plan for agriculture, a sector that is expected to be the worst affected by climate change.
Next Page »
ADVERTISEMENT ADVERTISEMENT