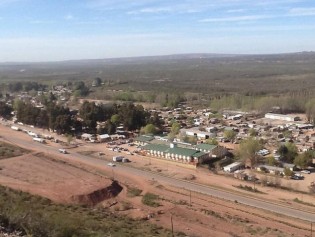 By Fabiana Frayssinet
This small town in southern Argentina is nearly a century old, but the unconventional fossil fuel boom is forcing it to basically start over, from scratch. The wave of outsiders drawn by the shale fuel fever has pushed the town to its limits, while the plan to turn it into a “sustainable city of the future” is still only on paper.
ADVERTISEMENT ADVERTISEMENT