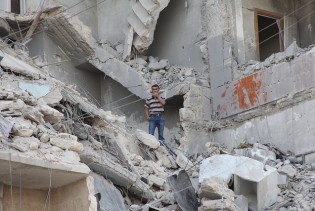 There is a “sign of hope for the long-suffering Syrian people” as a Syrian-led, Syrian-owned, credible and inclusive Constitutional Committee is set to start deliberations next month, the United Nations Special Envoy for the country told the Security Council on Monday.

By Daniel Gutman
Fares al Badwan moved to Buenos Aires alone, from Syria, in 2011. He was 17 years old then and the armed conflict in his country had just broken out. Since then he has managed to bring over his whole family and today he cannot imagine living outside of Argentina. "I like the people here. No one makes you feel like a foreigner," he said.

By Lyndal Rowlands
Syria’s White Helmets - the volunteers who rescue civilians from collapsed buildings - could be the “most popular” nominee for the Nobel Peace Prize ever, according to human rights group, the Syria Campaign.

By Lyndal Rowlands
Land mines are not the only type of explosive devices that families returning home after conflicts risk stumbling across, representatives from the UN’s Mine Action Service (UNMAS) told journalists here Monday.
Next Page »
ADVERTISEMENT ADVERTISEMENT