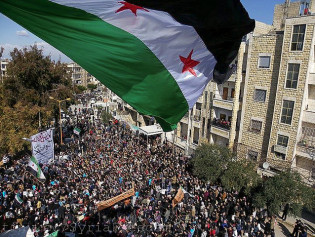 By Jim Lobe
Despite U.S. and Western pressure on the opposition to take part in U.N.-sponsored talks aimed at halting the two-and-a-half-year-old Syrian civil war, most experts here believe the rebels are unlikely to show up any time soon. And even if they do, the results will be unlikely to change much of anything on the ground.

By AJ Correspondents
Syrian activists claim that government forces have carried out a "poisonous gas" attack in suburbs of the capital, Damascus, leaving hundreds of people dead.

By Jim Lobe
With Syrian government forces and their allies scoring a major victory over Western- and Gulf Arab-backed rebel forces this week, neo-conservatives and other anti-Damascus hawks are trying hard to turn up the pressure on President Barack Obama to sharply escalate U.S. support for the opposition.