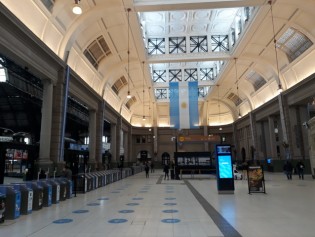 By Mario Osava
“I have lived through three good periods and two bad ones,” prior to the present crisis in the Brazilian shipping industry, said Edson Rocha, a direct witness since the 1970s of the ups and downs of a sector where nationalist feelings run high.

By Patricia Grogg
The Mariel special economic development zone, the biggest construction project undertaken in decades in Cuba, emerged thanks to financial support from Brazil, which was based on political goodwill, a strategy of integration, and business vision.

By Jeffrey Moyo
Mavis Gotora from Mabvuku high-density suburb, in Zimbabwe’s capital, Harare, walks up and down, as she persuades one passer-by after another to board the private taxi cab she drives.

By José Adán Silva
The law passed in Nicaragua to grant a concession to a Chinese company to build a canal between the Pacific and Atlantic oceans repealed legislation that protects Lake Cocibolca and its tributaries.
Next Page »
ADVERTISEMENT ADVERTISEMENT