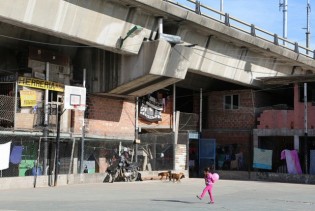 By Fabiana Frayssinet
If cities have souls, the Argentine capital’s is turning more and more grey. Real estate speculation, the fencing in and paving of parks, and the installation of private bars and restaurants in public squares have changed the face of the city. Green spaces with carefully tended flower beds? Today they’re found mainly in the nostalgia brought on by a classic tango song.
ADVERTISEMENT ADVERTISEMENT