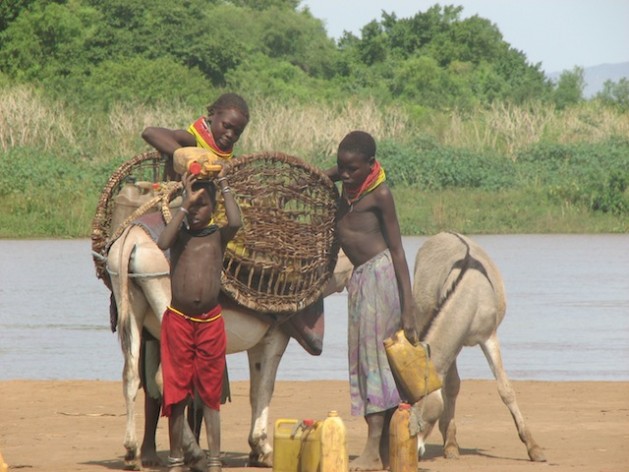 The ethnic communities living along Ethiopia’s Omo River and depend on annual flooding to practice flood retreat cultivation for their survival and livelihood. Credit: Ed McKenna/IPS

OMO VALLEY, Ethiopia, Nov 11 2013 (IPS) - As the construction of a major transmission line to export electricity generated from one of Ethiopia’s major hydropower projects gets underway, there are growing concerns that pastoralist communities living in the region are under threat.

The Gibe III dam, which will generate 1,800 megawatts (MW), is being built in southwest Ethiopia on the Omo River at a cost of 1.7 billion dollars. It is expected to earn the government over 400 million dollars annually from power exports. On completion in 2015 it will be the world’s fourth-largest dam.

"We are being told to stop moving with our cattle, to stop wearing our traditional dress and to sell our cattle. Cattle and movement is everything to the Mursi.” -- Mursi elder

But the dam is expected to debilitate the lives and livelihoods of hundreds of thousands of indigenous communities in Ethiopia’s Lower Omo Valley and those living around Kenya’s Lake Turkana who depend on the Omo River.

The Bodi, Daasanach, Kara, Mursi, Kwegu and Nyangatom ethnic communities who live along the Omo River depend on its annual flooding to practice flood-retreat cultivation for their survival and livelihoods.

But the semi-nomadic Mursi ethnic community are being resettled as part of the Ethiopian government’s villagisation programme to make room for a large sugar plantation, which will turn roaming pastoralists into sedentary farmers. The hundreds of kilometres of irrigation canals currently being dug to divert the Omo River’s waters to feed these large plantations will make it impossible for the indigenous communities to live as they have always done.

“We are being told that our land is private property. We are very worried about our survival as we are being forced to move where there is no water, grass or crops,” a Mursi community member told IPS.

The Omo Valley is set to become a powerhouse of large commercial farming irrigated by the Gibe III dam. To date 445,000 hectares have been allocated to Malaysian, Indian and other foreign companies to grow sugar, biofuels, cereals and other crops.

“The Gibe III will worsen poverty for the most vulnerable. The government already has trouble managing hunger and poverty [among] its citizenry. By taking over land and water resources in the Omo Valley, it is creating a new class of ‘internal refugees’ who will no longer be self-sufficient,” Lori Pottinger from environmental NGO International Rivers told IPS.

Top global financiers, including the World Bank and the African Development Bank (AfDB), have committed 1.2 billion dollars to a 1,070 km high-voltage line that will run from Wolayta-Sodo in Ethiopia to Suswa, 100 km northwest of the Kenyan capital, Nairobi. The transmission line, powered by Ethiopia’s Gibe III, will connect the country’s electrical grid with Kenya and will have a capacity to carry 2,000 MW between the two countries.

According to the AfDB, it will promote renewable power generation, regional cooperation, and will ensure access to reliable and affordable energy to around 870,000 households by 2018.

According to Prime Minister Hailemariam Desalegn, Ethiopia’s economy is set to maintain a growth rate of 11 percent in 2014. Fully exploiting its massive water resources to generate a hydropower potential of up to 45,000 MW in order to sell surplus electricity to its neighbours is central to Ethiopia’s Growth and Transformation plan, a five-year plan to develop the country’s economy.

The Horn of Africa nation currently generates 2,000 MW from six hydroelectric dams and invests more of its resources in hydropower than any other country in Africa – one third of its total GNP of about 77 billion dollars.

According to a World Bank report published in 2010, only 17 percent of Ethiopia’s 84.7 million people had access to electricity at the time of the report. By 2018, 100 percent of the population will have access to power, according to state power provider Ethiopian Electric Power Corporation (EEPCO).

The Ethiopian government insists that the welfare of pastoralist communities being resettled is a priority and that they will benefit from developments in the Omo Valley. “We are working hard to safeguard them and help them to adapt to the changing conditions,” government spokesperson Shimeles Kemal told IPS.

However, there are concerns that ethnic groups like the Mursi are not being consulted about their changing future. “If we resist resettlement we will be arrested,” a Mursi elder told IPS.

“We fear for the future. Our way of life is under threat. We are being told to stop moving with our cattle, to stop wearing our traditional dress and to sell our cattle. Cattle and movement is everything to the Mursi.”

The importance of ensuring that benefits from Ethiopia’s national development projects do not come at a price of endangering the lives of hundreds of thousands pastoralists is critical said Ben Braga, president of the World Water Council. Braga decried governments that failed to compensate communities like the Mursi as displacement of surrounding communities is always an inevitable consequence of major dams that need plenty of advanced planning to avoid emergencies.

“How can we compensate these people so that the majority of the country can benefit from electricity? There is a need for better compensatory mechanisms to ensure that benefits are shared and that all stakeholders are included in consultations prior to construction,” he told IPS.