Too Hot for Chocolate 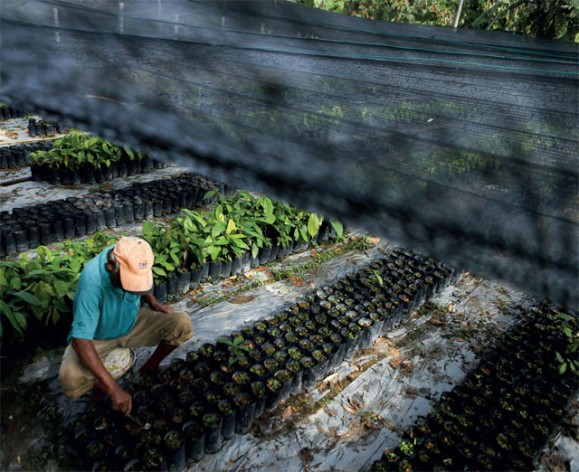 A worker at a cocoa farm in Klang, outside Kuala Lumpur.

Apr 7 2016 - In the last months of 2014 breaking news shocked the world’s chocolate lovers: within a few years the world could face a significant potential cocoa shortage due to climate change.

The news that by 2050 there might be not enough cocoa to make one of the most loved and affordable luxury products came as a bolt in the blue in a year when the chocolate industry enjoyed record global revenues of $117 billion. Such a relevant performance was driven by a 2.1% increase in volume, reflecting above all a growing appetite for chocolate in emerging markets.

The single biggest factor improving the industry’s performance is in fact due to a significant increase consumption in many major emerging markets such as India, Brazil and China. The potential long-term growth in emerging economies – many of which have growing middle classes – is vast. To give just one example: the per capita consumption of chocolate in China is only a tenth of that in Switzerland. Yet the future is not without challenges because in the last four decades cocoa production, which is already under pressure due to unsustainable farming techniques and lack of investments by smallholder farmers, will be significantly challenged by climate change.

Combining the above-mentioned factors with the rising demand for chocolate from China, Brazil and other emerging markets as well, the cocoa industry is likely to face supply shortages in the near future.

According to a study released by the International Center for Tropical Agriculture, temperatures in some regions of Ghana and Ivory Coast, which together account for more than 60% of global cocoa supply, would become unsuitable for cocoa growing. The objective of the study, which was partially financed by the Bill and Melinda Gates Foundations, was to design future climate scenarios to predict the impact of climate change on the suitability for growing cocoa in the main growing regions of Ghana and Ivory Coast.

In Ghana and Ivory Coast the yearly and monthly rainfall will decrease slightly by 2050, except for coastal areas in Ghana, but the yearly and monthly minimum and maximum temperatures will increase by 2030 and continue to increase by 2050. Overall climate becomes less seasonal in terms of variation throughout the year with temperature in specific districts increasing by about 1.2°C by 2030 and of 2.1°C by 2050 and less seasonal in precipitation with the number of dry months decreasing from four to three.

The implications are that the distribution of suitability within the current cocoagrowing areas in Ghana and Ivory Coast in general will decrease quite seriously by 2050 because of the temperature increases. Higher temperatures mean that more water evaporates into the air from leaves and earth, leaving less behind for cocoa trees – a process called “evapotranspiration.”

Climate change will increasingly affect weather patterns around the world, as well as water availability and agricultural productivity. The cocoa tree only grows in equatorial climates where significant areas of land may no longer be suitable for cocoa growing. Moreover, cocoa is a major cash crop of the tropical forest, and export earnings from its sales form a major part of the economics of those countries in equatorial Africa, Southeast Asia, and Latin America where small-scale family farmers rely completely on cocoa production for living.

According to the 2012 Cocoa Barometer Report, around 90% of world cocoa is produced on small family farms, with an estimated 20 million smallholders and rural workers depending directly on cocoa for their livelihood. Cocoa trees play an absolutely critical role in rural life and many of these farmers use the cocoa trees like “ATM machines: they pick some pods and sell them to quickly raise cash for school fees and medical expenses.”

The decline in cocoa production will uncover the fragility of farmers’ reliance on a single crop to make a living and, even if some areas remain suitable for cocoa, this will happen only when the farmers adapt their agronomic management to the new conditions. Therefore, without empowering and investing in small-scale farmers, the industry will struggle to provide sufficient supply. In fact, these small-scale family farmers, most of whom have never tasted a bar of chocolate, live in chronic poverty.

Without a strong and effective intervention from major chocolate companies, it is more likely that they will simply switch to more lucrative crops like palm oil or rubber, accelerating the negative trend in cocoa availability. In this context, chocolate companies have to invest more money in sustainability programs to improve the livelihoods of cocoa farmers.

According to the Earth Security Index 2015, multinational companies as well as countries like Switzerland, which is the global hub of the lucrative chocolate trade, need to do much more to prevent a future supply chain crisis. Some companies, for example Barry Callebaut (which alone processes almost a quarter of the world’s cocoa beans), are encouraging cocoa farmers to plant shade trees, including valuable timber trees. These trees will not only provide shade to protect the cocoa trees, but they will also provide an income when the aging plantation has to be replanted, bridging the income gap until new trees start bearing fruit. As clearly stated in the study released by the International Center for Tropical Agriculture: “the winners will be those who are prepared for change and know how to adapt.”

In the meantime, keep calm and eat chocolate… before it’s too late!

Carlo Clini is an Associate Fellow of The Institute for Environmental Security.