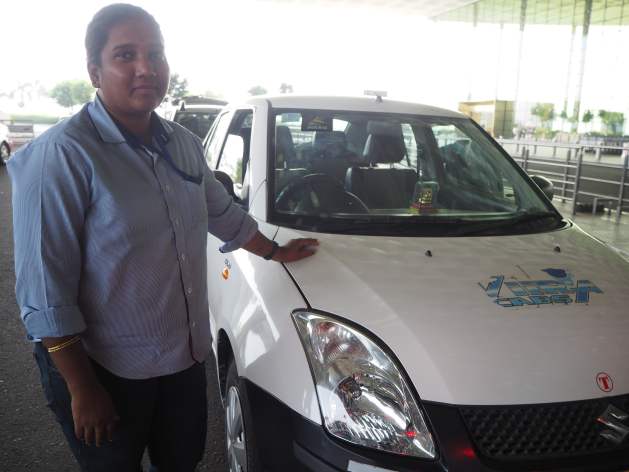 MUMBAI, Nov 22 2017 (IPS) - Jahhavi Kshsarter pulls out on to the Western Express Highway, careful to avoid the swarm of cars, lorries and motorbikes zipping past. She is one of 65 women employed by an all-female taxi company in Mumbai.

Viira Cabs is a taxi service run by women for women launched ten years ago in Mumbai, a city with a population of roughly 22 million. The company employs only female drivers who are all trained in self-defence.

Viira was launched by entrepreneur and activist Preeti Sharma Menon and is a platform for poor, urban women. The fleet runs on compressed natural gas and the chauffeurs are committed to smooth, safe driving. In some cases the women are the sole bread winners in their family. Jahhavi Kshsarter says she is now able to earn more than 10,000 rupees a month, equivalent to 154 dollars.

Viira, meaning courageous woman, is also a recruitment agency and a motor training school. The company has a 12 week driver training programme where the women undergo many hours of driving in addition to classes on road safety, traffic signs, motor mechanics, verbal communication, women’s rights and self-defence. There are also tips on dealing with road range and avoiding conflicts.

Viira Cabs is a taxi service run by women for women launched ten years ago in Mumbai, a city with a population of roughly 22 million. The company employs only female drivers who are all trained in self-defence.
The inclusion of women in transport services has a two-fold aspect – to provide safe transport for women and to provide employment opportunity for women from low economic backgrounds. Viira Cabs also aspire to have an impact on road safety by encouraging safe, defensive driving.

“The traffic is dangerous here in the city. I know because both of my parents were killed in a car accident. But I do this as a living and to be able to provide for my six-year-old son,” Jahhavi Kshsarter told IPS.

The male taxi drivers in the city laugh when they see a female driver.

“They say women can’t drive and they try to overtake me,” Jahhavi Kshsarter says, while she navigates safely through the morning rush hour traffic.

The streets echo to the sound of revving cars and rumbling lorries in a kaleidoscope of colors, slogans and intricately painted symbols. Revved-up engines and impatient horns fill the air.

Among the clients are tourists and locals as well as Bollywood stars. Once Jahhavi Kshsarter met Bollywood icon Salman Khan. She drove a friend of the famous Indian film actor and producer from the airport to his apartment in Bandra in western Mumbai.

Jahhavi Kshsarter got her license ten years ago and joined the taxi service.

“I have a small child and nobody else to support me. I had to find a job to support my son and be able to pay his school fee. I hope my child will be a big man one day.”

Her son attends a private school in Pune, 150 kilometers from Mumbai and she visits him every six months.

Incidents of sexual harassment are common occurrence on public transport in India. Recent years’ debate in India on how women are subject to sexual harassment and violence has increased the need for safe transportation in several metropolitan areas.

In 2015 an Uber taxi driver in Delhi was convicted of raping a 27-year-old finance company executive. The 2012 murder and gang rape of a 23-year-old woman on a Delhi bus triggered massive protests and forced the government to set up a panel to amend laws related to violence against women.