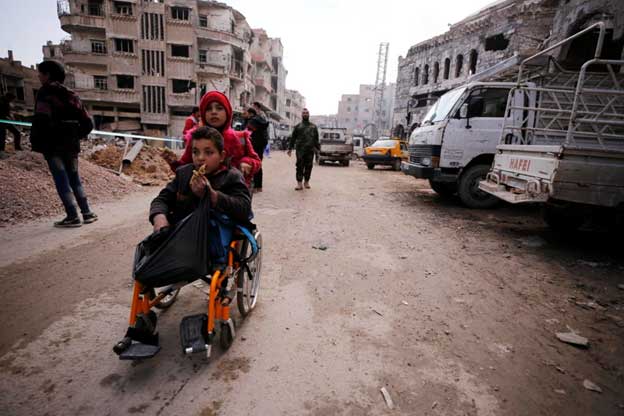 UNITED NATIONS, Jun 25 2021 (IPS) - When the UN’s annual report on Children and Armed Conflict was released last week, it was expected to “name and shame” some of the world’s worst human rights violators – particularly the abusers of children.

But these violators were protected– and never stigmatized—despite the hundreds of children killed by warring parties in ongoing conflicts, particularly in Yemen, Syria and Myanmar, involving the US, Russia and China as arms suppliers, triggering criticism from UN watchers and human rights organizations.

Jo Becker, Children’s Rights Advocacy Director at Human Rights Watch, told IPS: “We continue to be disappointed that the Secretary-General (SG) is not using the “list of shame” to hold all parties accountable for their grave violations against children”.

The message he is sending to the Saudi-led coalition regarding their operations in Yemen is that “as long as they kill and maim fewer children than they did the year before, they can stay off the list”.

“We also saw in the case of Myanmar how disastrous it was to remove the Tatmadaw (the country’s armed forces) from the list while they were still recruiting and using children; the number the following year tripled”.

The SG should not make listing decisions based on his hopes for future improvement, but based on the facts on the ground, said Becker.

His repeated failure to base his list, on the UN’s own evidence, betrays children and fuels impunity. ”Now that his second term as Secretary-General is assured, he should abandon that approach and ensure his list reflects the facts. And the UN Security Council should insist that he list all violators, without exception,” declared Becker.

The oil-blessed Saudi Arabia, which is leading a coalition in the military conflict in Yemen, is a longstanding political and military ally of the US– which along with the UK, China, Russia and France– is armed with veto powers in the Security Council.

Russia provides political and military support to war-ravaged Syria while China, one of the largest arms suppliers to Myanmar, has undermined Security Council attempts to impose an arms embargo in the conflict-ridden country.

Ian Williams, President of the New York-based Foreign Press Association (FPA) and author of ‘UNtold: The Real Story of the United Nations in Peace and War’, told IPS Guterres has adopted a human rights profile that is low enough to be subterranean.

History suggests that one of the few weapons open to the SG and the UN collectively is “naming and shaming”, he said, pointing out, it is also true that many member states — like the 57-member Organization of Islamic Conference (OIC) that refuses to support the Uighurs, are also shamelessly unprincipled in the face of power — but an ethical and forthright SG, as the tribune for the UN Charter, could turn the tide.

“If Guterres is more concerned about posterity than his pension—and if he wants to make the history books rather than the footnotes– he should take his cue from Dag Hammarskjold, speak truth to power. And avoid chartered aircraft,” said Williams, a former President of the UN Correspondents’ Association (UNCA).

Various models of SG-ship have been tried, he pointed out, but none of them are entirely successful.

“Kofi Annan tried the nice approach. Ban Ki-moon tried being nice in public, firm in meetings with heads of state, and furious in private with the gratuitous insults they heaped upon him”, said Williams.

Perhaps the most hard-hitting comments came from Kenneth Roth, executive director of Human Rights Watch (HRW): “Guterres’s first term was defined by public silence regarding human rights abuses by China, Russia, and the United States and their allies,” he said, referring to the three veto-wielding permanent members of the UN Security Council.

“With his re-election behind him, Guterres should use the next five years to become a strong vocal advocate for rights. His recent willingness to denounce abuses in Myanmar and Belarus should expand to include all governments deserving condemnation, including those that are powerful and protected.”

Since taking office in January 2017, Guterres has rarely criticized or called for accountability by specific governments or their leaders, said Roth.

He adopted a similar approach to crimes against humanity in Xinjiang by China’s government, now the UN’s second biggest financial contributor, after the US, and to war crimes by Saudi Arabia in Yemen, complained Roth.

HRW also said Guterres has been reluctant to criticize abuses by Russia’s government, which has frequently used its veto power in the Security Council to block human rights-related resolutions on Syria and elsewhere. Guterres should also exercise stronger leadership against the global pushback on women’s rights, it added.

According to Watch List on Children and Armed Conflict, the Secretary-General removed the Saudi and Emirati-led coalition from his annual list of child rights abusers last year, despite the UN finding that it was responsible for killing and maiming 222 children in Yemen in 2019.

At the time, he had vowed to re-list the coalition if it failed to sustainably decrease violations.

“As the UN’s latest report shows, the Secretary-General’s decision to remove the Saudi and Emirati-led coalition from his shame list last year sent a clear message that parties can get away with killing children,” said Adrianne Lapar, director of Watchlist on Children and Armed Conflict.

“If the Secretary-General does not immediately reconsider his decision and return the coalition to his list, he seriously undermines international efforts to protect children in war and emboldens warring parties to be more abusive against children.”

Meanwhile, Save the Children, a leading humanitarian organization for children, pointed out that 194 Yemeni children were killed and maimed in 2020, but the UN Report on Children and Armed Conflict again fails to hold perpetrators to account.

But despite the killings in Yemen in 2020, according to UN verified data, the Saudi and Emirati led coalition gets a green light to continue destroying children’s lives in Yemen, the organization said.

“In a disheartening decision, the UN Secretary General António Guterres again failed to include the coalition in this year’s ‘list of shame’.”

It was taken off the list last year, with a commitment by the Secretary General to relist them unless there was a ‘sustained significant decrease in killing and maiming’. By not relisting the coalition, Guterres sends the message that reducing the number of child casualties to about two hundred is ‘good enough’ progress, Save the Children said.

Matthew Wells, Deputy Director of Thematics for Amnesty International’s Crisis Response Programme said Guterres, “who has just been given another five-year term; must become bolder and more courageous in prioritizing human rights and calling out perpetrators, including on children and armed conflict.”

Together with the Special Representative for Children and Armed Conflict, he should commit publicly to applying the same standard irrespective of perpetrator or context – producing a complete list based on evidence and objective criteria, something he has failed to do again this year.

Next year, he must follow the criteria laid out in 2010; the Saudi Arabia-led coalition and Israeli military, among others, will again prove a key test.

For their part, UN member states must demand a credible list. Why have teams on the ground put themselves in danger to document violations that get ignored?, asked Wells.