Education Cannot Wait and partners provide a pathway to the safety and hope of an education for refugee children - 'together we heal, learn and shine' 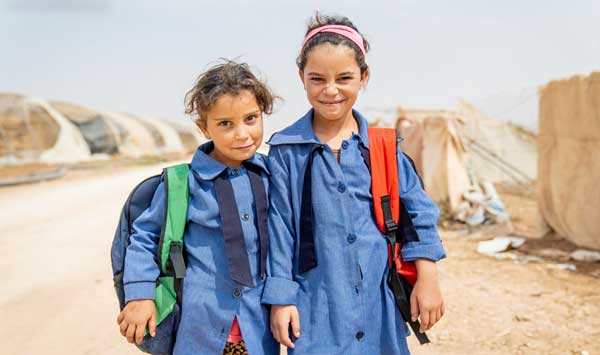 Jun 18 2021 - “Education will prepare refugee children and youth for the world of today and of tomorrow. In turn, it will make the world more resilient, sustainable and peaceful.” ~ Filippo Grandi, UN High Commissioner for Refugees

Each year on June 20th, the international community comes together to celebrate World Refugee Day. Designated by the United Nations in honor of refugees across the globe, this international day celebrates the courage, strength and perseverance of those who have been forced to flee their home countries to escape conflict or persecution.

The day serves as a reminder of the importance of respecting the human rights of refugees all around the world – especially the right to a quality education for children and youth fleeing conflict, climate change-induced disasters and other emergencies.

This year marks the 20th World Refugee Day with the theme “Together we heal, learn and shine.” As the United Nations global fund for education in emergencies and protracted crises, Education Cannot Wait joins other UN agencies and champions across the globe to shine a light on the rights, needs and dreams of the world’s most vulnerable children and youth.

“Education cannot wait for a conflict or crisis to be over so that refugee children can go home. Families caught up in conflicts spend an average of 17 years as refugees. When education is denied to children, hopes for a better, fairer future are lost.” ~ Yasmine Sherif, Director of ECW A person becomes displaced every two seconds – that’s six people, forced to flee their homes, by the end of this very sentence.

The UN Refugee Agency (UNHCR) estimates that there are 26.3 million refugees in the world. Amongst them, 7.3 million are refugees between the ages of 4 and 18. This staggering statistic represents children and youth full of skills, ideas, hopes and immense potential.

Despite the efforts of the international community over the past decades, a lot more must be done to ensure that every refugee girl and boy has access to an education and the tools and support they need to build a brighter future.

“You have to understand, no one puts their children in a boat unless the water is safer than the land.” ~ Poet and activist Warsan Shire

“Without resolute political commitment by global leaders, as well as additional resources for Education Cannot Wait and its UN and civil society partners, millions of girls and boys may never return to school. Investing in the education of these vulnerable children and youth is an investment in peace, prosperity and resilience for generations to com – and a priority for the United Nations.” ~ António Guterres, United Nations Secretary-General

ECW is committed to protecting the human rights of refugee girls and boys to a safe, quality education. To date, ~30 per cent of the children and youth reached through ECW’s investments are refugees. Another 10 per cent are internally displaced. On 25 August 2017, escalating violence triggered an exodus of Rohingya people from Myanmar to Bangladesh. Men, women and children brought with them accounts of the unspeakable atrocities. Since their arrival in Bangladesh, Rohingya refugees have grappled with new challenges – fires, floods, landslides, severe storms and the COVID-19 pandemic.

Theirs are stories of courage, determination and strength to rebuild lives from scratch in overcrowded refugee camps.

Working with the Government of Bangladesh, UNICEF, UNESCO, UNHCR and other partners, ECW announced a new multi-year resilience programme in Bangladesh in 2018. With US$12 million in catalytic seed funding from the UN’s global fund for education in emergencies, the programme is designed to reach half a million refugee children and youth. Chad continues to see a large influx of refugees fleeing violence in the Central African Republic and Sudan, attacks by Boko Haram in Nigeria and conflict surrounding the Lake Chad crisis. For many of the girls and boys in refugee camps throughout Chad, ECW-funded education initiatives have allowed them to attend school for the first time in their lives.

ECW continues to work with numerous partners – including UNICEF, Fondazione Acre, the Jesuit Refugee Service, Refugee Education Trust International – and in coordination with the Government of Chad to deliver reliable quality education for young refugees enduring the consequences of rampant violence in the region.

Read how an ECW-financing is providing budding young scientists with school kits and science materials in Chad and allowing young mothers to return to the classroom. Learn more through these stories of hope and redemption on the edge of one of the world’s most pressing humanitarian issues. Of the 5.4 million Venezuelans who have been forced to flee their country since 2015 due to violence and instability, over 2 million have resettled in Colombia. This protracted humanitarian crisis, the largest in the Western Hemisphere, puts already vulnerable children and youth at increased risk.

ECW has been investing in Colombia since 2019 through First Emergency Response grants focusing on out-of-school children and adolescents from Venezuela. ECW has also provided catalytic investment grants for Multi-Year Resilience Programmes both for Venezuelan refugees and host communities in Colombia, in addition to another regional grant to advance resource mobilization, policy support, data collection and advocacy to accelerate the impact of ECW investments in Colombia and other neighboring countries, such as Ecuador and Peru. Democratic Republic of the Congo

Vulnerable girls and boys along the northern border region of the DRC and the Central African Republic (CAR) are trapped in a humanitarian crisis that is rapidly escalating. There are 4.7 million refugee, displaced and host community children and youth in the DRC currently in urgent need of education support.

In May 2021, ECW Director Yasmine Sherif and UN High Commissioner for Refugees Filippo Grandi traveled to Ubangi-Nord Province to meet newly arrived refugees from CAR, 70% of whom have never attended school before arriving in the DRC. ECW’s support in the DRC in the form of a First Emergency Response grant, a Multi-Year Resilience Programme and a COVID-19 Education in Emergency Response is helping to alleviate some of their most urgent educational needs.

Through strong partnerships bridging the humanitarian-development-peace nexus, ECW is working alongside the Government of the DRC, partners such as UNHCR and local organization such as African Initiatives for Relief and Development (AIRD) and AVSI to ensure that refugee children and youth don’t miss out on the education and security they deserve. Lebanon hosts the largest proportion of refugees per capita in the world. Since 1948, it has been home to a large Palestine refugee community and, since 2011, it has seen about 1.7 million Syrians – many of them children – cross into the country. This mass influx and other emergencies, such as the ongoing COVID-19 pandemic, have added further barriers for young refugees in accessing education and building a brighter future for themselves and their families.

ECW is working with the Government of Lebanon and partners such as AVSI, UNWRA, Norwegian Refugee Council, Save the Children, SAWA for Development & Aid, UNESCO, the International Rescue Committee and Mouvement Social to ensure that vulnerable children receive the education and psychosocial support they need and deserve.

Learn how ECW support in Lebanon is allowing Syrian refugees to connect to learn amidst the pandemic and read about ECW’s recent mission to Lebanon, led by Director Yasmine Sherif. According to Save the Children, Uganda hosts the largest number of refugees on the African continent. Despite progress made in offering them a better future, Save the Children estimates that about 57% of refugee children in Uganda are out of school – in some cases, for several years.

The impact of COVID-19 has further exacerbated the challenges facing the education system. In March 2020, all education institutions closed and 15 million learners were sent back home, including 600,000 refugee children. Working with the Government of Uganda, UNICEF, UNHCR, Save the Children, Plan International, World Vision, HP, UNESCO and other partners, ECW is giving hope to the country’s most vulnerable learners – from supporting remote educational programmes to water and sanitation facility upgrades in schools and learning centers.

ECW’s multi-year investment in Uganda helped increase the gross enrollment ratio for refugee children from 53 per cent in 2017 to 75 per cent in 2019.

Read about ECW’s impact in Uganda, including how a school for refugees is serving as a global template, how a refugee teacher is inspiring students to become educators themselves, and how ECW and partners are addressing the digital divide and helping refugees in the country to build skills for the 21st century. Together we heal, learn & shine

“ECW’s focus on refugees, internally displaced and crisis-affected communities has created a platform to support students and teachers most in need.” ~ Filippo Grandi, UN High Commissioner for Refugees

The COVID-19 pandemic has further exacerbated the inequalities faced by refugee learners and progress that has been made in recent years in increasing refugee enrollment in schools is at risk.

To mitigate the impacts of the COVID-19 pandemic, ECW has allocated $45.4 million in funding to support actors on the ground across 33 countries/emergency contexts, $22 million of which have been exclusively dedicated to supporting refugee and internally displaced children and youth.

Despite this progress, more needs to be done. Education Cannot Wait needs at least an additional $400 million to bridge its funding gap for the 2021-2023 period and ensure that an additional 4.5 million children and young people – many of them refugees affected by conflict, climate change and COVID-19 – receive an education over the next three years. The time to act is now

This World Refugee Day, as the global community declares in one voice that “Together we heal, learn and shine”, let us not underestimate the power of education in this equation. Not merely as a critical element in international refugee response, but in its potential to protect, enlighten and empower the most vulnerable children and youth in the darkest crisis-affected contexts so that they may begin to rebuild their lives and “shine.”