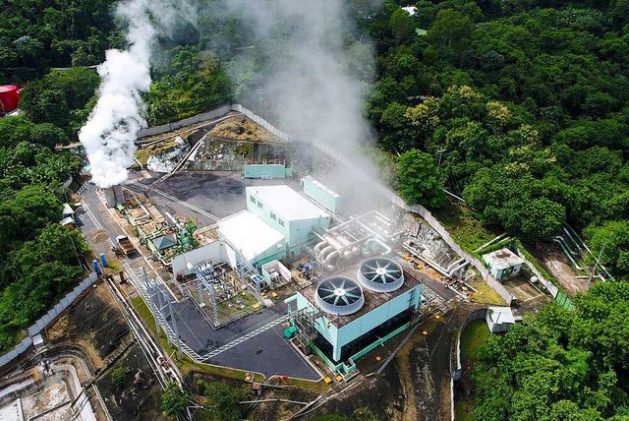 El Salvador is one of the countries in the world that has made the most progress in harnessing geothermal energy, which it has in abundance, like its Central American neighbours. CREDIT: LaGeo

SAN SALVADOR , Jul 19 2021 (IPS) - That a country like El Salvador, poor and with many social needs, would embark on an effort to attract so-called bitcoin mining, which demands a huge amount of energy and does not generate large numbers of jobs, is an extravagance that many find hard to digest.

“In El Salvador financial resources are not abundant, they are not well distributed, we are fighting for climate and/or energy justice, and I think this will certainly aggravate the situation,” environmentalist Ricardo Navarro, director of the Salvadoran Centre for Appropriate Technology, a local affiliate of Friends of the Earth International, told IPS.

Nor do analysts and economists fully understand the ultimate goal of the Salvadoran government’s decision to make bitcoin legal tender, as announced by President Nayib Bukele in a video shown during the Bitcoin 2021 conference, held Jun. 4-5 in Miami.

“I have the impression that this is an improvised decision, without any technical basis,” economist Carlos Acevedo, former president of El Salvador’s Central Reserve Bank (BCR), told IPS.

Among the public, there are many who are also racking their brains trying to understand Bukele’s move.

A Francisco Gavidia University survey published on Jul. 8 found that 95 percent of respondents said the U.S. dollar is the currency they value for the stability of their household economy, and only one percent said it was bitcoin.

Bitcoin mining and villages without electricity

Geothermal energy has been suggested as the source for bitcoin mining in the country, but it is not entirely clear where the Bukele government will get the amount of energy needed to keep the “mining” computers running, said experts consulted by IPS.

Bitcoin mining is the process by which hundreds or thousands of powerful computers, housed in facilities called “mining farms”, attempt to solve the complex mathematical problems of the bitcoin algorithm.

When solutions are found, after intensive consumption of electricity, it is said that a bitcoin has been “mined”, as if it were extracted from the ground. It is validated by the rest of the “miners” or computer systems and is put into circulation.

But while the government seeks to promote this activity, there are villages that still have no electricity.

To tell their stories, IPS has visited villages and communities in rural El Salvador that, with great sacrifice and effort, have set up their own small hydroelectric projects for self-sufficiency, since they have been marginalised by the two private companies that distribute electricity in the country.

In this Central American nation of 6.7 million people, 97.6 percent of the population has electricity. But in rural areas the proportion drops to 95.2 percent. The remaining 4.8 percent use candles, lanterns and other means to light up their nights, according to the Multiple Use Survey, published in 2020. The community leader of Joya de Talchiga, Juan Benítez, sits at the edge of the dam that the villagers built to create the El Calambre mini-hydroelectric plant, which finally provided the 40 families of this mountain hamlet in eastern El Salvador with electricity. CREDIT: Edgardo Ayala/IPS

“I would look favourably on it if they said: look, let’s see how we can increase geothermal energy by opening some wells and produce electricity for cantons that don’t have it,” Navarro said.

At an international level, environmental criticism of bitcoin mining focuses on the enormous amount of electricity it requires, enough to light up entire cities or even countries, and the generation of greenhouse gas emissions that this entails.

“Most of the bitcoin mines have been in China where two-thirds of the mix is dirty, coal-based energy,” which is cheap because that nation has invested in that type of energy infrastructure, sustainability and environmental expert Juan Marco Álvarez told IPS.

But the idea that the Salvadoran government should dedicate its efforts to attracting “miners” of the cryptocurrency, taking advantage of the fact that many are leaving China, does not quite add up, say analysts.

A law to bitcoinise the country

The Salvadoran legislature, dominated by President Bukele’s Nuevas Ideas (New Ideas) party, passed the Bitcoin Law on Jun. 9, making it legal tender, and turning this small Central American country into the first nation in the world to legalise the cryptocurrency.

The dollar is the official currency here since El Salvador dollarised its economy in November 2000, and it will coexist with the bitcoin as of Sept. 7, when the new law goes into effect.

Local and international economists have criticised the move by Bukele, known for his personalist style of governing, in which any important measure is announced by him through a tweet rather by officials from the area or ministry in question. The Ahuachapán Geothermal Power Plant, one of two of its kind in El Salvador that process the renewable energy from the heat of the earth’s depths. CREDIT: Edgardo Ayala/IPS

On Jun. 9, Bukele tweeted: “I have instructed the president of LaGeo (our public geothermal energy company) to implement a plan to provide bitcoin mining facilities with energy that comes from our volcanoes: cheap, 100 percent clean and with zero emissions. This will evolve fast!”

He added that engineers from LaGeo had just informed him that they had opened a new well that would provide some 95 MW of 100 percent clean, zero-emission energy from El Salvador’s volcanoes.

The tweet was accompanied by a short video showing a couple of LaGeo employees trying to control a jet of steam gushing at high pressure from a pipe that is part of what is understood to be a newly drilled geothermal well.

We are “starting to design a whole mining farm around it,” Bukele said.

However, the president did not clarify whether it was a well located in one of the two existing geothermal stations in the country, or a new one in an unknown location.

One plant is located in the department of Ahuachapán, in the western part of the country, and the other in the vicinity of Berlín, a municipality in the eastern department of Usulután.

Together, the two stations have an installed capacity of 204.4 MW and a net production equivalent to 21.8 percent of the electrical energy generated in El Salvador, which makes this one of the countries with the greatest use of geothermal energy. According to official data, the rest of the electricity mix is made up of hydropower (27.75 percent), solar (10.78 percent), biomass (17 percent), bunker fuel (15.94 percent) and diesel (0.04 percent).

There has been much speculation about the actual existence of the announced new well, since information is scarce and little more is known than what the president said in his tweet.

The expert added that the well that produces the most energy in El Salvador is the TR-18th, at the Berlin station, which provides about 20 MW.

Furthermore, drilling a geothermal well is expensive, costing between 15 and 20 million dollars, which makes it unfeasible in the short term, although it could be feasible in the medium term, in four or five years, said Álvarez.

For his part, Acevedo, the former president of the BCR, said he sees no incentive for “miners” to move to El Salvador, given the high cost of electricity, whose average price is around 12 cents per kilowatt/hour, versus the three or four cents it costs in more competitive countries, such as China or Kazakhstan. A solar park in the central Salvadoran department of La Paz was the country’s first solar power plant, with 320,000 photovoltaic panels, and is one of the largest in Central America. CREDIt: Edgardo Ayala/IPS

Besides, the tropical climate of El Salvador, where the temperature averages around 30 degrees Celsius in the daytime, is not the best environment for the installation of computer equipment for mining, which generates a great deal of heat. That is why it is usually set up in countries with colder climates.

“In a country like Iceland you need air conditioning systems to cool off the computers, just imagine in the case of El Salvador,” commented the economist, who presided over the BCR between 2009 and 2013, during the first government of the leftist Farabundo Martí National Liberation Front.

One viable way to attract them, however, would be for the companies interested in coming to “mine” here to develop their own solar power plants – the cleanest energy – for self-supply, said the environmentalist Álvarez.

Otherwise, they would have to connect to the national grid and that would mean taking power away from the public, including industry, he said.

An experiment with an expiration date

Even before it has come into force, experts are predicting that the bitcoin could come to an end in El Salvador sooner rather than later, as it faces a series of contradictions with a dollarised economy, for example in relation to foreign trade, which is also tied to the dollar, said Acevedo.

The economist pointed out that El Salvador pays for imports of goods and services, which in 2019 amounted to 12 billion dollars, with exports and remittances, each of which brought in six billion dollars that year, which meant a balance of payments.

But if, say, half of the remittances were sent in bitcoins, as the current government expects, so that Salvadorans abroad would not have to pay the cost of the transfers, then a gap of three billion dollars would be generated in the balance of payments to pay for imports of goods and services, he said.

“There the accounts no longer add up, because we would have to pay 12 billion but we would only have nine billion dollars,” Acevedo said.

“That’s why I think it’s not going to last long,” he argued.