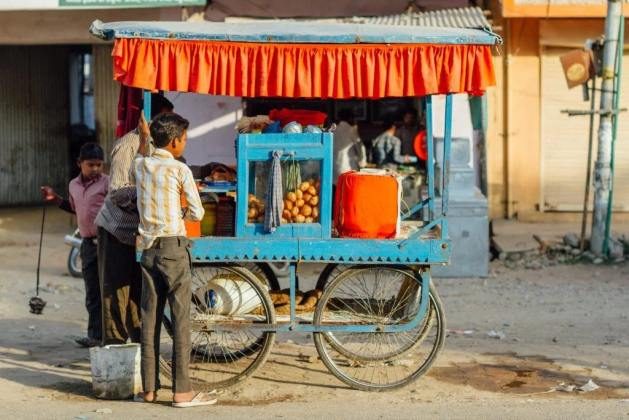 Since the passing of the act around seven years ago, only a minor fraction of its extensive recommendations has been implemented. Picture courtesy: Adam Cohn.

MUMBAI, India, Mar 2 2022 (IPS) - In the second week of January 2022, Purushottam—locally known as Prashant—a street vendor in central Delhi’s Connaught Place area, died by suicide. It was later discovered that the reason for his death was his inability to pay certain debts.

Ground reports show that, since November 8, 2021, approximately 150 street vendors in Connaught Place, including Purushottam, have lost their livelihoods due to forced eviction by municipal authorities.

Over the past few years, the vast population of vendors has reported facing repeated harassment or eviction at the hands of the police, local authorities, and society. Therefore, street vendors remain marginalised and their situation grows increasingly precarious, despite the fact that they are protected by the law

It is a complex combination of pressures from market traders’ associations, insensitive court orders, bureaucracy, and non-existent planning standards that have disallowed street vending—one of the largest economies for self-employed workers—in Connaught Place.

This removal of street vendors has further been replicated in other well-established markets of Delhi such as Lajpat Nagar, Sarojini Nagar, and Chandni Chowk, and is now being extended to other cities across India.

What the Street Vendors Act 2014 guarantees

In 2014, the central government passed the Street Vendors (Protection of Livelihood and Regulation of Street Vending) Act based on Article 21 of the Constitution of India—the right to live with dignity. As the title suggests, the act is designed to ‘protect’ and ‘regulate’ street vending in urban areas.

Till 2014, street vending was an ungoverned territory where ‘regulation’ meant the removal of vendors, who were considered illegal and unfit to be in cities. The Street Vendors Act 2014 attempted to change this mindset in the following ways:

Overall, the act is a nuanced, well-designed legislation that is a result of numerous years of contributions from social movements led by street vendors’ associations and incremental progressive court directives.

Why are forced evictions taking place in Delhi?

Poor implementation of the act

The evictions taking place in Delhi have set a dangerous precedent by undermining the Street Vendors Act 2014—the only progressive legislation enacted for the upliftment of working-class groups such as street vendors. Since the passing of the act around seven years ago, only a minor fraction of its extensive recommendations has been implemented.

With much reluctance, it is only now that street vendors are being surveyed and issued licenses and certificates of vending in Delhi. However, with no demarcation of the vending and non-vending zones in the city, the vendors find themselves without ‘space’ on the city streets.

Over the past few years, the vast population of vendors has reported facing repeated harassment or eviction at the hands of the police, local authorities, and society. Therefore, street vendors remain marginalised and their situation grows increasingly precarious, despite the fact that they are protected by the law.

In 2021, various market traders’ associations put forth petitions challenging the act. While listening to their grievances, the Delhi High Court passed unfavourable comments on the legal rights of street vendors in Delhi.

The bench further questioned the basis of the act and said that “the country will go to [the] dogs if this act is implemented in its entirety. What will happen if street vendors start sitting on your doorsteps?”

The court also raised concerns over the rising number of vendors in the city and questioned how Delhi could become like London if the planning aspect wasn’t focused on. These comments were made alongside the passing of a legal order to remove street vendors from their spaces of work.

The same bench also stated that the act is heavily biased towards the street vendors and that there are no experts in the TVCs.

It should be noted that street vendors in Delhi make up only 40 percent of the TVC by having 12 seats out of 30, whereas 10 seats are taken by local authorities, planning authorities, the police and traffic police, the revenue department, the medical officer, and the CPWD/PWD/works department of the local authority.

The committee also offers eight seats to nonprofits, resident welfare associations, community-based organisations, and market traders’ associations—independent bodies that are nominated by the state government itself. With such a comprehensive list, encompassing the economic, spatial, health, social, and administration perspectives, the TVC is full of experts and, therefore, is not tilted towards the vendors.

In spite of many deliberations in the TVCs where vendor representatives have pushed for a comprehensive survey to identify and register street vendors, there has been a bureaucratic lethargy and rigidness in execution. For example, the TVC meetings are not held regularly and survey and certificate issuance processes are slow.

Often the chairpersons—who are usually IAS officers—don’t listen to the TVC members, thus systematically undermining the democratic nature of TVCs.

From the minutes of the TVC meetings1 it is apparent that members representing government authorities such as the health, police, and planning departments do not attend them, thus missing the opportunity to make these meetings enriching and participatory. Together, the poor functioning of the TVCs inhibits the proper implementation of the act and allows forced evictions to continue.

The recent eviction orders are unlawful also because they are based on the Master Plan of Delhi (MPD) 2021 and older vending zones—both of which were made prior to the passing of the Street Vendors Act 2014.

Moreover, as mentioned previously, the act mandates the right of TVCs to decide on vending and non-vending zones. Unfortunately, this right has been curtailed under the present MPD 2001–21 since the plan has not been amended in line with the Street Vendors Act 2014.

Now the latest draft of the MPD 2041 has also carried forward the same legacy by excluding the 2.5 percent norm on the number of street vendors in a city, TVCs, and participatory process on the vending zone demarcation. It is not a matter of coincidence that the North Delhi Municipal Corporation’s smart city plans—like the smart city plans of many other cities—have demarcated the central park and surrounding areas as ‘hawker-free zones’.

Outside the bureaucratic and city planning hurdle, societal apathy and disdain towards the vendors comes from a colonial mindset where they are viewed as smugglers and encroachers occupying public spaces, posing a threat to pedestrians’ right of way.

How do we move forward and course-correct?

The Street Vendors Act 2014 is the only legal framework that protects street vendors, as it focuses on enhancing their livelihoods and safeguarding them from evictions and harassments.

It uplifts the values of democracy by setting up the TVCs as decision-making authorities that conduct surveys, issue certificates of vending, and provide vendors with spatial right to the city.

Due to the COVID-19 pandemic, the last couple of years have been extremely difficult for street vendors and the informal economy.

Our research has shown that their incomes have reduced by more than 40 percent in the case of Delhi, and many vendors have reported falling into debt traps. The proactive measures taken by the government through the PM SVANidhi scheme and the Delhi government reaching out with PDS and non-PDS relief were only of temporary help.

The bigger problem for street vendors is that they were not legally permitted to work in the city even prior to the pandemic. Addressing this problem requires concrete efforts from the government at the central, state, and local levels.

The first step is to explicitly integrate urban development schemes such as the MPD, Smart Cities Mission, and Swachh Bharat Abhiyan with the objectives and mandates of the Street Vendors Act 2014. Since these schemes are integral to a city’s strategic planning and welfare, they must recognise the needs and aspirations of street vendors.

There is also a need to focus on training and capacity building of urban local bodies, TVCs, and vendors so that they can play a decisive role in executing the act, for example, to identify and demarcate vending zones.

Further, the Delhi Development Authority needs to acknowledge the absence of street vending and other informal livelihoods from the MPD. Lastly, there is a need to include natural markets, weekly markets, women’s markets, and other heritage markets in the MPD 2041.

Unless we reform urban planning both in theory and in practice, our cities will continue to see exclusionary development. The implementation of the Street Vendors Act 2014 could be seen as an opportunity to prioritise the welfare of the urban poor and enhance their livelihoods.

Aravind Unni is an urban rights activist and researcher associated with the National Hawker Federation.

Shalaka Chauhan is a social designer by training. Her work focuses on urban planning vis-à-vis urban poverty and inequality.