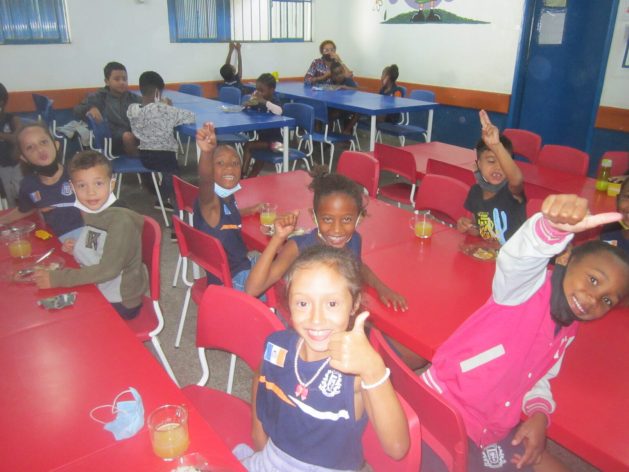 Students eat lunch in the cafeteria of the João Caffaro Municipal School in Itaboraí, in southeastern Brazil. Schoolchildren returned to eating vegetables and drinking natural fruit juices when the school canteens and the supply of family farming products to the National School Feeding Program resumed in April this year, after an interruption brought about by the COVID pandemic. CREDIT: Mario Osava/IPS

He and Tainá Cassia Faria, a 13-year-old fifth grader, both dislike yams (Dioscorea spp., a popular tuber), but say they love the food the school serves them. “We eat everything, we don’t leave anything on our plates,” they said in the cafeteria of the public primary school. Noodles, beans and meat are their favorites.

“Today we have cake!” said another excited schoolboy.

This year it has been possible to offer “a greater variety of quality foods, incorporating fruits and vegetables,” with the full reinstatement of the National School Feeding Program (PNAE), said Deise Lessa, the school’s principal since 2011 and a teacher for 35 years in this municipality located about 50 kilometers from Rio de Janeiro.

“Many children have their only full meal of the day at school, given the poverty and unemployment affecting the local population.” -- Mauricilio Rodrigues

In response to the COVID-19 pandemic, the schools in this South American country closed their doors from March 2020 until the gradual return of students to the classrooms began in mid-2021, along with the return of school meals, which ensure adequate nutrition for a large part of Brazil’s poor children.

“The PNAE is fundamental in school life. Many children have their only full meal of the day at school, given the poverty and unemployment affecting the local population,” said Mauricilio Rodrigues, Itaboraí’s secretary of education since the current municipal authorities took office in January 2021.

“Eighty percent of the students in our schools are from low-income families,” he noted during the day that IPS spent at the same primary schools in Itaboraí that we visited in 2015, to check on the post-pandemic school feeding situation.

Two changes were evident at João Caffaro. One was the use of masks by schoolchildren in the classrooms, which are only removed in the dining room and outdoor playground, despite the fact that in the state of Rio de Janeiro, where the municipality is located, masks are no longer mandatory.

Another is that in the dining room, as a measure to curb the spread of the disease, the multicolored tablecloths of the past have disappeared, and now the tables are bare and disinfected before each group of children comes in. Furthermore, the groups are limited in size and are spread throughout the large space which in the past was crowded with schoolchildren. In addition, we were not allowed to enter the kitchen this time, for health reasons. 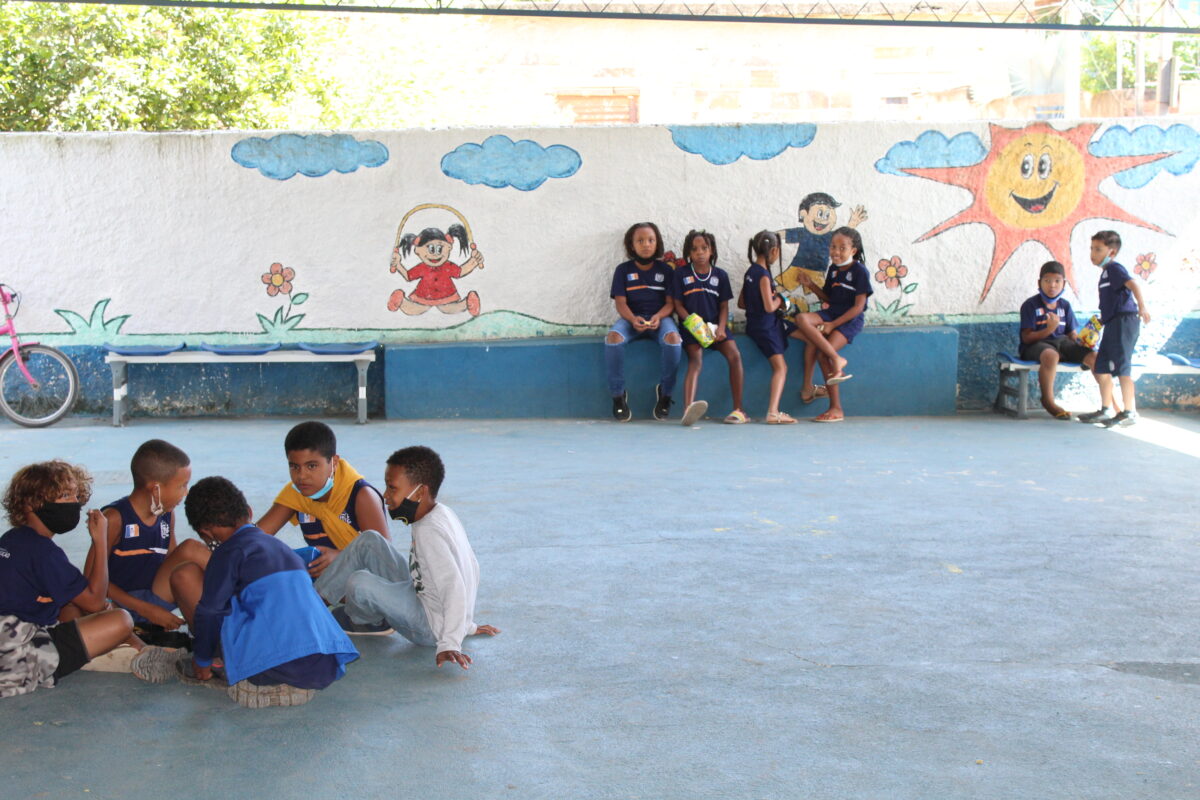 Lunch is a feast for the children at the João Caffaro Municipal School. They are served food that they rarely have in a single meal at home, with meats, assorted vegetables, fruits, natural juices and even cakes for dessert. The meals are a guarantee of good nutrition that was only partially alleviated by food distribution when schools were closed during the peak of the pandemic, in 2020 and much of 2021. CREDIT: Mario Osava/IPS

Alliance between schools and family agriculture

“Many children never miss class because of the lunch we serve,” said the principal of the municipal school with a student body of 450, located in the Engenho Velho neighborhood, where most of the population lives in poverty, in this city of 245,000 inhabitants.

School meals, as an initiative of the Brazilian government, began to be served in the 1940s, when few people went to school. They evolved with the democratization of education, especially after the 1988 national constitution recognized the right of primary school students to a food supplement provided by the government.

To carry out the program, the municipal and state governments receive funds from the National Education Development Fund (FNDE), administered by the Ministry of Education.

In 2009, a new law established a requirement with positive effects on child nutrition and local economies: that a minimum of 30 percent of PNAE purchases in each municipality must be of products from local family farms.

This is what makes it possible for elementary school students in Itaboraí to eat fresh vegetables and a variety of fruits. Banana, orange, tangerine, guava, cassava, pumpkin, sweet potato, lettuce and kale are the most purchased foods from local farmers, said Ana Beatriz Garcia, coordinator of school food programs in the prefecture. 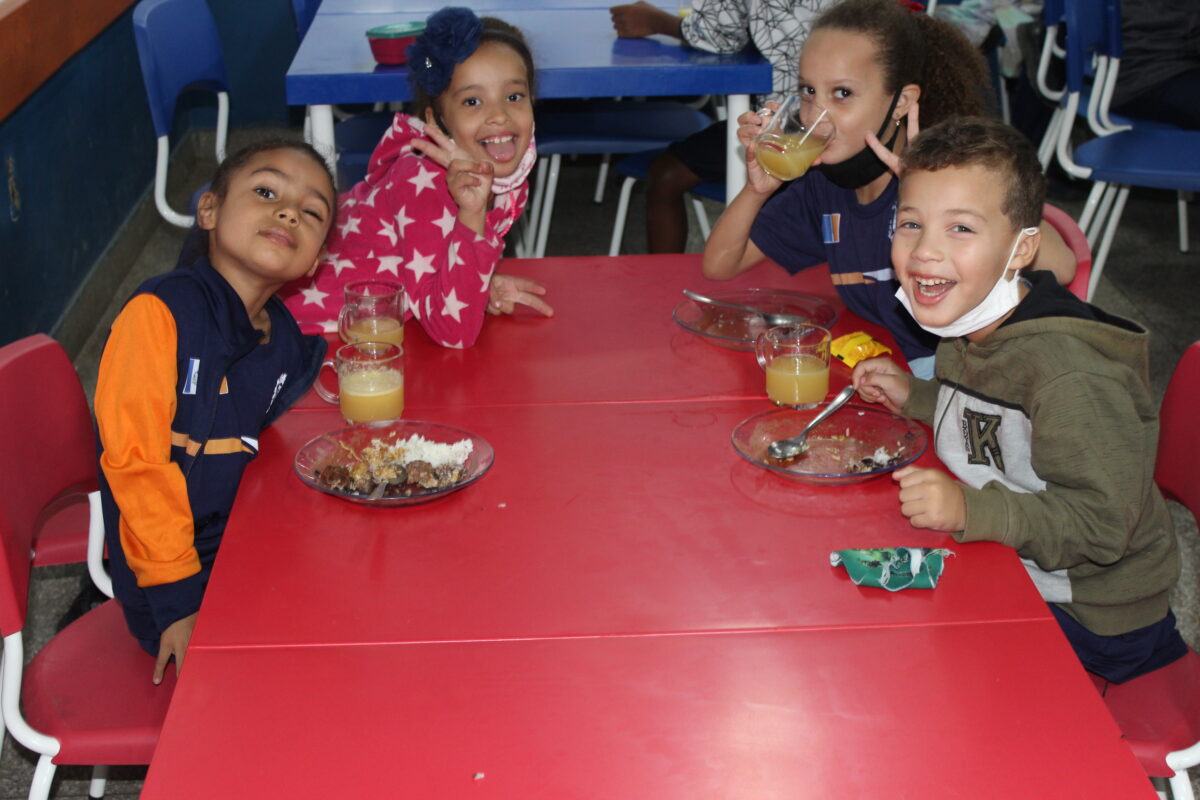 Lunch is a feast for the children at the João Caffaro Municipal School. They are served food that they rarely have in a single meal at home, with meats, assorted vegetables, fruits, natural juices and even cakes for dessert. The meals are a guarantee of good nutrition that was only partially alleviated by food distribution when schools were closed during the peak of the pandemic, in 2020 and much of 2021. CREDIT: Mario Osava/IPS

Interruption due to the pandemic

That was not possible in 2020, when schools were closed because of the pandemic and students took classes online throughout the country. An attempt was made to alleviate the closure of school cafeterias by distributing basic food baskets to students’ families, but it was not the same. Perishable fresh produce could not be included.

On-site classes in Itaboraí were partially resumed as of June 2021, with each group divided into two halves that took turns in the classrooms every two days. Thus, regular purchases from family farmers could not be resumed either.

But the mayor’s office promoted fairs in schools, where families could pick up fresh food for home consumption, replacing school meals, said Lessa, the principal of the João Caffaro school.

In this country of 214 million people, most children attend primary and secondary school either in the morning or the afternoon. These public school students are served two meals, lunch and a snack. Children in other schools attend for the entire day, and are served four meals: breakfast, lunch and two snacks.

“Despite the difficulties, we met the goal set by the PNAE, acquiring 36 percent of the food served to students from family agriculture,” said Secretary of Education Rodrigues. This year they expect to reach between 35 and 40 percent during the February to December school year.

“The biggest difficulty is the logistics of getting the food to the network of schools,” he said. There are four or five trucks or vans that carry the meals every day, operated in a joint effort by the municipal secretariats of Education and Agriculture. 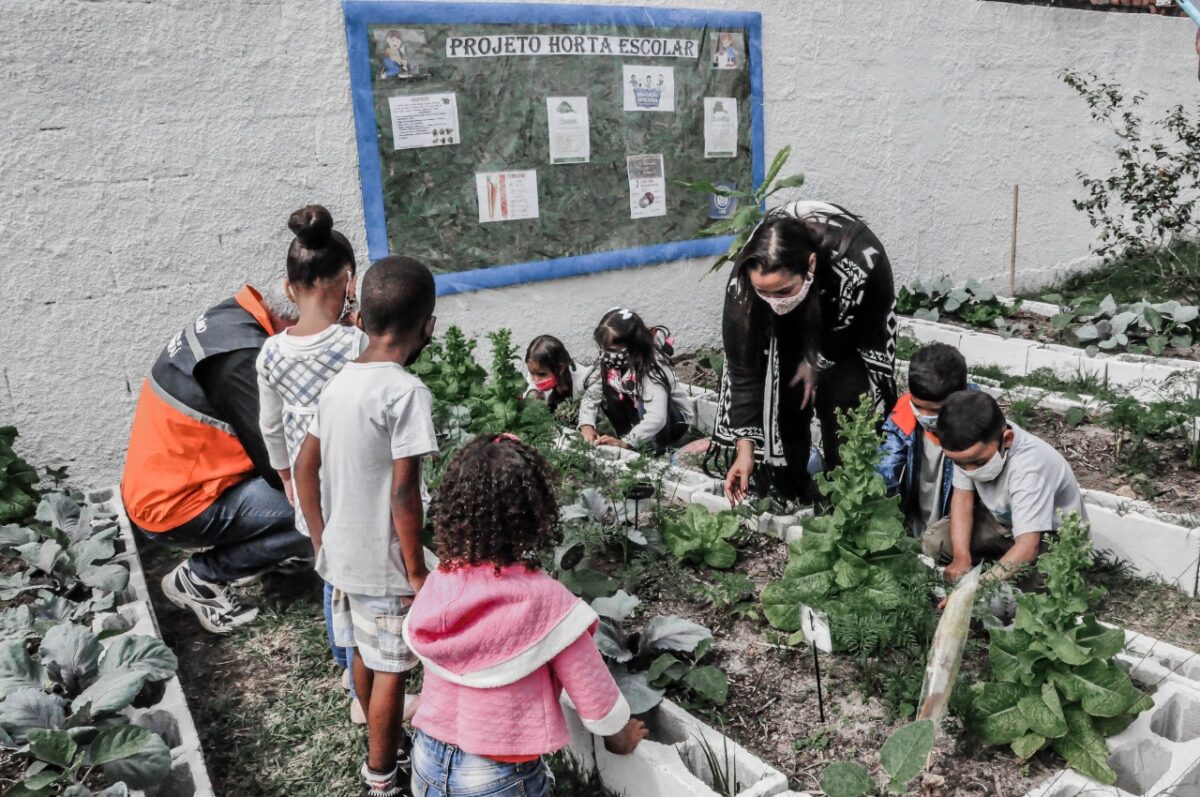 Two teachers and several elementary school students work in the vegetable garden at the Jueza Patricia Acioli Full-Time School in the city of Itaboraí, in southeastern Brazil. The aim is both educational and nutritional, to foment the consumption of vegetables and fruits when schoolchildren grow them with their own hands. CREDIT: Secom/Itaboraí

Itaboraí has 35,000 students in its 92 public nursery and elementary schools, in addition to adult education. They include children of preschool age, four and five years old, and first to fifth graders.

To plan purchases, design the menu and provide orientation for the schools, the Itaboraí Municipal Department of Education has a central team of 13 nutritionists, in addition to a nutritionist in each school.

“We have to be flexible in the plans, each product has its harvest time and can be scarce because of too much or too little rain, or can be ready early as is happening with the persimmon harvest this year,” said Larissa de Brito, one of the chief nutritionists.

“That’s why we are in constant dialogue with the farmers,” she added.

“Our relationship with the farmers has improved, because we visit them at the beginning of the year and now accept purchases from individual producers, whereas before purchases were only arranged through their associations,” explained coordinator Garcia. 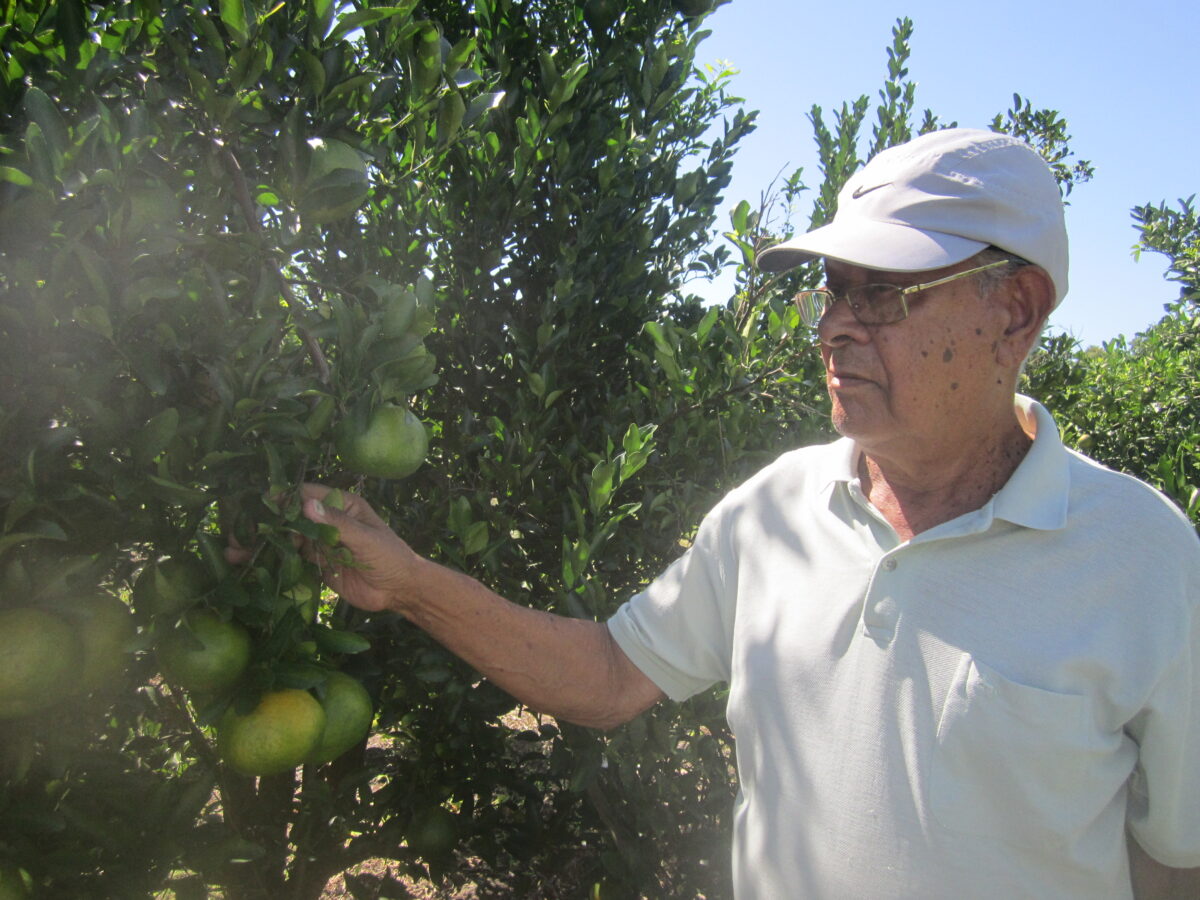 Alcir Coração, an 81-year-old family farmer, stands next to an orange grove on his farm, where he harvests fruit that he sells to the Itaboraí municipal government for school meals. He lost his entire harvest in 2020 and part of it in 2021, because of the COVID pandemic that forced schools to be closed in Brazil. But this year he expects to do even better than the good sales of the pre-pandemic years. CREDIT: Mario Osava/IPS

The municipality of Itaboraí is 11 percent rural, and the rural population makes up only 1.2 percent of the total. But there are many family farms, encouraged by the proximity of large markets. Oranges are the star product, due to their renowned quality.

Alcir Coração is the 81-year-old president of the Association of Family Farmers of Itaboraí and Neighboring Municipalities (Agrifami), which has relied on the PNAE since 2009, when the program decided to make family farmers suppliers of at least 30 percent of its purchases.

“This will turn out well,” he predicted at the time. So he decided to expand his production, especially of oranges, on his 10 hectares of land, divided into two farms of 6.5 and 3.5 hectares in size, 10 kilometers from the town of Itaboraí.

He enlisted the support of his 41-year-old son-in-law, Marcio da Veiga, as a partner in the undertaking.

“In 2020 we harvested 3000 kilos of oranges and lost everything, waiting for the demand from the schools that did not arrive,” lamented Coração. In 2021 the loss was smaller; the PNAE orders “arrived late,” but they eventually did.

“This year started well,” with a call for purchases as early as April. It was never done so early and also doubled the limit for the annual sale of each farmer in relation to last year, raised to 40,000 reais (8,600 dollars at the current exchange rate), he said, visibly pleased.

He and his son-in-law produce different varieties of oranges, called selecta, natal and lima, as well as tangerines and lemons. “Lemons are harvested all year round, but their price is low, oranges yield more income,” Da Veiga said, explaining why they decided to expand their orange groves. 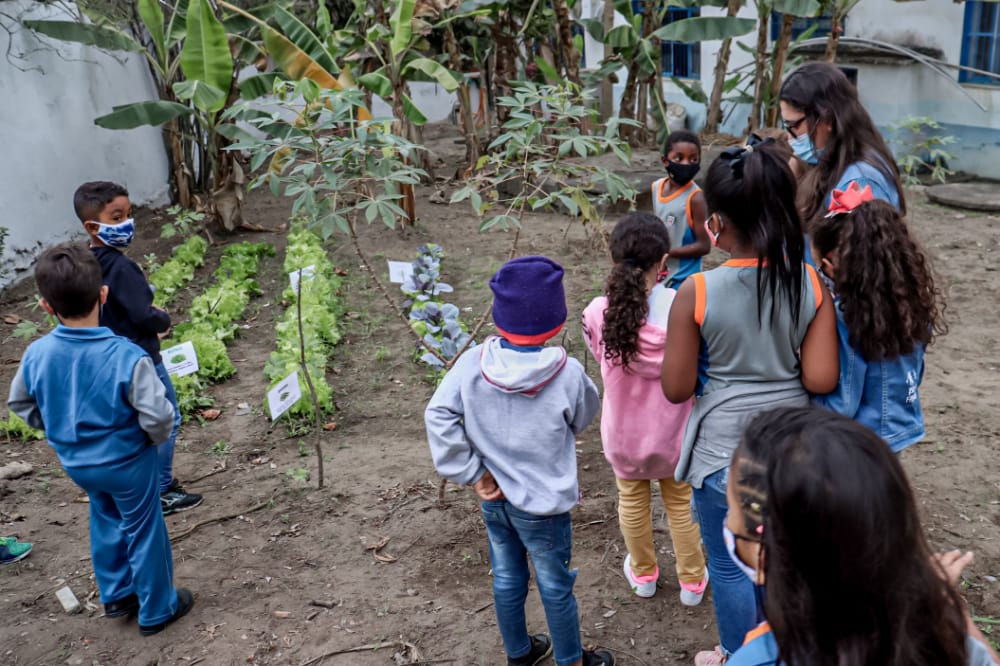 From a young age, students grow vegetables for their own lunches at the Patricia Acioli School. As it is a full-day school, where students attend for eight hours, they receive four meals: breakfast, lunch and two snacks. CREDIT: Secom/Itaboraí

In 2021, some public schools in Itaboraí also started to grow some of their own vegetables. At the Juiza Patrícia Acioli Municipal School, the 265 students plant and harvest lettuce, carrots, kale, cabbages, eggplants and other vegetables.

The aim is educational, to help students learn what the land has to offer, how food is produced and what healthy eating is, school principal Alessandra Wenderroschi told IPS.

“By taking part in growing the food with their own hands, students have more motivation to eat vegetables, even arugula,” she said. It is a “valuable educational activity,” she added.