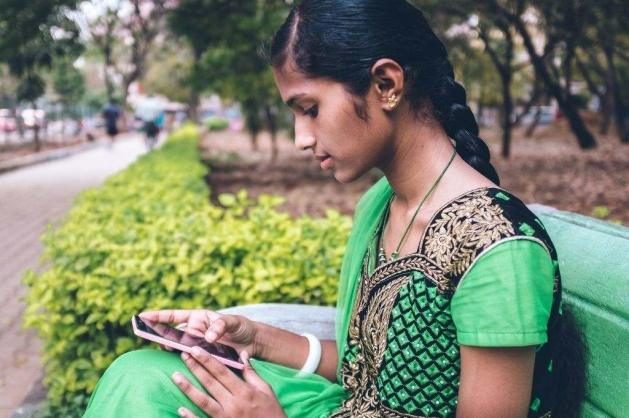 Gender equality in the labour force is a significant way to empower women. Credit: Mentor Together.

Gender equality in the labour force is more than an economic end in itself; it is also a significant way to empower women. Women who work in India have more say in household decision-making and can delay their age of marriage and the birth of their first child.

The relatively low number of women in the workforce includes both women who are employed and those actively searching for jobs. Therefore, I examined the impact of three interlinked factors that uniquely constrain young women’s capabilities or choices to participate in the workforce: a skills deficit, a network gap, and restrictive gender norms.

In conceptualising the role that mentorship can play to tackle these three challenges, I reviewed more recent research that model mentoring programmes as a context for activities, and not just as a set of one-to-one relationships.

The latter has been the predominant format in which mentoring programmes have emerged across the globe as an effective positive youth development practice. Viewing mentorship as a context for activities recognises the many systems surrounding a young person that also need active shaping or reshaping.

The three to four years of tertiary education offers government, educators, employers, and civil society a unique opportunity to empower young women through supportive skills, networks, and norm changes. The return on investment on 15 cumulative years of education will be much higher when we ensure that young women can transition into and thrive in the labour force

As in this case of female labour force participation, focusing solely on young women’s skills is necessary but insufficient. If we do not increase the opportunities she has access to or the support her family provides her, we cannot meaningfully change her life outcomes.

A newer format of mentoring—digital mentoring—holds promise in tackling all three of these factors collectively. Additionally, it can be accessed by several young women, given India’s exponentially increasing internet user base and shrinking gender gap in mobile phone usage.

I explored three pathways for change in digital mentoring: skills exchange through individual mentoring relationships, opportunity expansion through the transfer of social capital across a large and trusted mentor network, and the role modelling of egalitarian gender norms through new actors who can influence family and community.

What evidence exists on this model today?

From March 2020 to April 2021, women comprised 61 percent of the total enrolment of 7,100 mentees in the programme. Female mentees were 89 percent more likely than men to complete all the eligibility requirements to get a mentor, and they resultantly accounted for 70 percent of all mentorships.

The programme saw higher interest from young women in their first two years of college. Most of these women were pursuing engineering degrees and came from low-income backgrounds.

Similarly on emotional regulation, 70 percent of mentees post mentorship scored higher than the average score of the group pre-mentorship. An evidence-based work readiness mentoring curriculum emerged as important to help them learn and practice these skills with their mentors.

Digital mentoring supported the creation of a large and diverse network of career mentors more than 4,000 volunteer mentor applicants over 13 months. The mentor pool was gender-balanced, with mentors having seven to eight years of work experience on average and speaking more than 10 languages.

The mentor network was created through outreach efforts driven by 26 large corporates. Mentee trust in the network was rooted in mentor screening. Building a large and diverse mentoring network cannot happen at the cost of building trust through processes that vet member identity and intent.

Despite creating a large network, facilitating new information and opportunity exchange was limited to individual mentoring relationships; the mentoring network at large was not tapped into to identify new information for all mentees.

Closing this network gap is vital for young women who lack career pathways through their immediate family or extended networks. The average number of young women who knew someone working in the field that interested them was five to seven.

Only one in five young women had a parent who had studied for a tertiary degree or higher. Only 25 percent of fathers worked in formal salaried jobs, whereas 25 percent were in casual labour or daily wage jobs and 43 percent were self-employed.

When it came to gender norms, the young women in this study lived in two parallel worlds. As tertiary education students in the programme network, their aspirations, career plans, and economic empowerment were championed by mentors.

Meanwhile, their families were planning for more traditional routes of marriage and familial responsibilities. A key question emerged: Could a large network of mentors who champion more egalitarian gender norms discuss the impact of traditional patriarchal norms in mentees’ lives or advocate for such norms to be changed with families, communities, and networks at large?

There is evidence from other countries that negative beliefs held by family members around women working, such as the overestimation of disapproval by others or mistaken beliefs around prevailing practices, can change when countered with correct information.

Additionally, there is promising new evidence that secondary networks of socialisation where new norms are practised—a network of mentors in this case—can facilitate the transmission of new ideas quicker than traditional primary networks.

Recommendations for a sustainable digital mentoring practice and policy ecosystem

This ecosystem must include actors in a range of roles with different responsibilities across community, institutional, and regulatory spheres.

Some key recommendations are:

1. Collect and publish data on student income profiles
Leverage the All India Survey of Higher Education report for this, so that financial support needs can be understood and addressed by different central and state scholarship schemes.

2. Include digital access costs in financial support
All tertiary education scholarships should support costs of laptops, mobile phones, and internet access, so that economically marginalised young women can fully participate in virtual learning.

3. Set up a nodal organisation for the state that coordinates all preparation activities for college to workforce transition
Ensure that such a body has a gender focus subgroup that is concerned with the specific needs of young women in tertiary education. Designate such an organisation in each state to disseminate mentoring programmes across higher education institutions (HEIs).

6. Address the work readiness skills gap
Mentoring programmes should closely track emerging skills needs and use evidence-based frameworks to draw up mentoring curriculums that promote the required skills. The targeted skills should transcend those that are narrowly seen as important for work and cover broader aspects, including gender sensitivity, religion and caste sensitivity, and climate change consciousness.

9. Transform social norms
Launch nationwide campaigns that champion the notion that women belong workplaces and present the right to work as a human right. Emulate policies and programmes that have contributed to female education becoming acceptable and desirable, such as the Right to Education Act, Sarva Shiksha Abhiyan, and Beti Bachao Beti Padhao.

The three to four years of tertiary education offers government, educators, employers, and civil society a unique opportunity to empower young women through supportive skills, networks, and norm changes. The return on investment on 15 cumulative years of education will be much higher when we ensure that young women can transition into and thrive in the labour force.

Arundhuti Gupta is the CEO of Mentor Together, a nonprofit organisation in India that provides mentoring relationships and networks to young people from socio-economically disadvantaged backgrounds