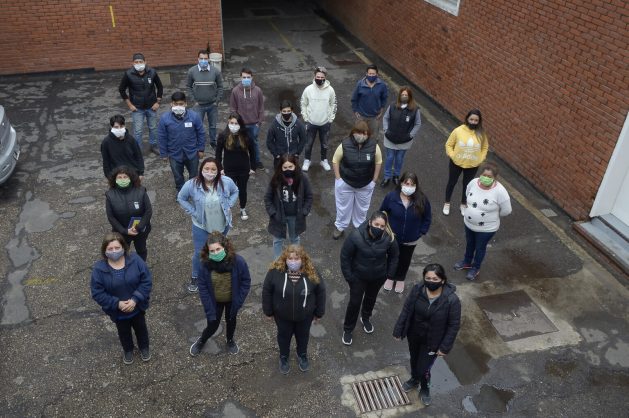 A group of Farmacoop workers stand in the courtyard of their plant in Buenos Aires. Members of the Argentine cooperative proudly say that theirs is the first laboratory in the world to be recovered by its workers. CREDIT: Courtesy of Pedro Pérez/Tiempo Argentino.

BUENOS AIRES, May 24 2022 (IPS) - “All we ever wanted was to keep working. And although we have not gotten to where we would like to be, we know that we can,” says Edith Pereira, a short energetic woman, as she walks through the corridors of Farmacoop, in the south of the Argentine capital. She proudly says it is “the first pharmaceutical laboratory in the world recovered by its workers.”

Pereira began to work in what used to be the Roux Ocefa laboratory in Buenos Aires in 1983. At its height it had more than 400 employees working two nine-hour shifts, as she recalls in a conversation with IPS.

But in 2016 the laboratory fell into a crisis that first manifested itself in delays in the payment of wages and a short time later led to the owners removing the machinery, and emptying and abandoning the company.

The workers faced up to the disaster with a struggle that included taking over the plant for several months and culminated in 2019 with the creation of Farmacoop, a cooperative of more than 100 members, which today is getting the laboratory back on its feet.

In fact, during the worst period of the pandemic, Farmacoop developed rapid antigen tests to detect COVID-19, in partnership with scientists from the government’s National Council for Scientific and Technical Research (Conicet), the leading organization in the sector.

Farmacoop is part of a powerful movement in Argentina, as recognized by the government, which earlier this month launched the first National Registry of Recovered Companies (ReNacER), with the aim of gaining detailed knowledge of a sector that, according to official estimates, comprises more than 400 companies and some 18,000 jobs.

The presentation of the new Registry took place at an oil cooperative that processes soybeans and sunflower seeds on the outskirts of Buenos Aires, built on what was left of a company that filed for bankruptcy in 2016 and laid off its 126 workers without severance pay. 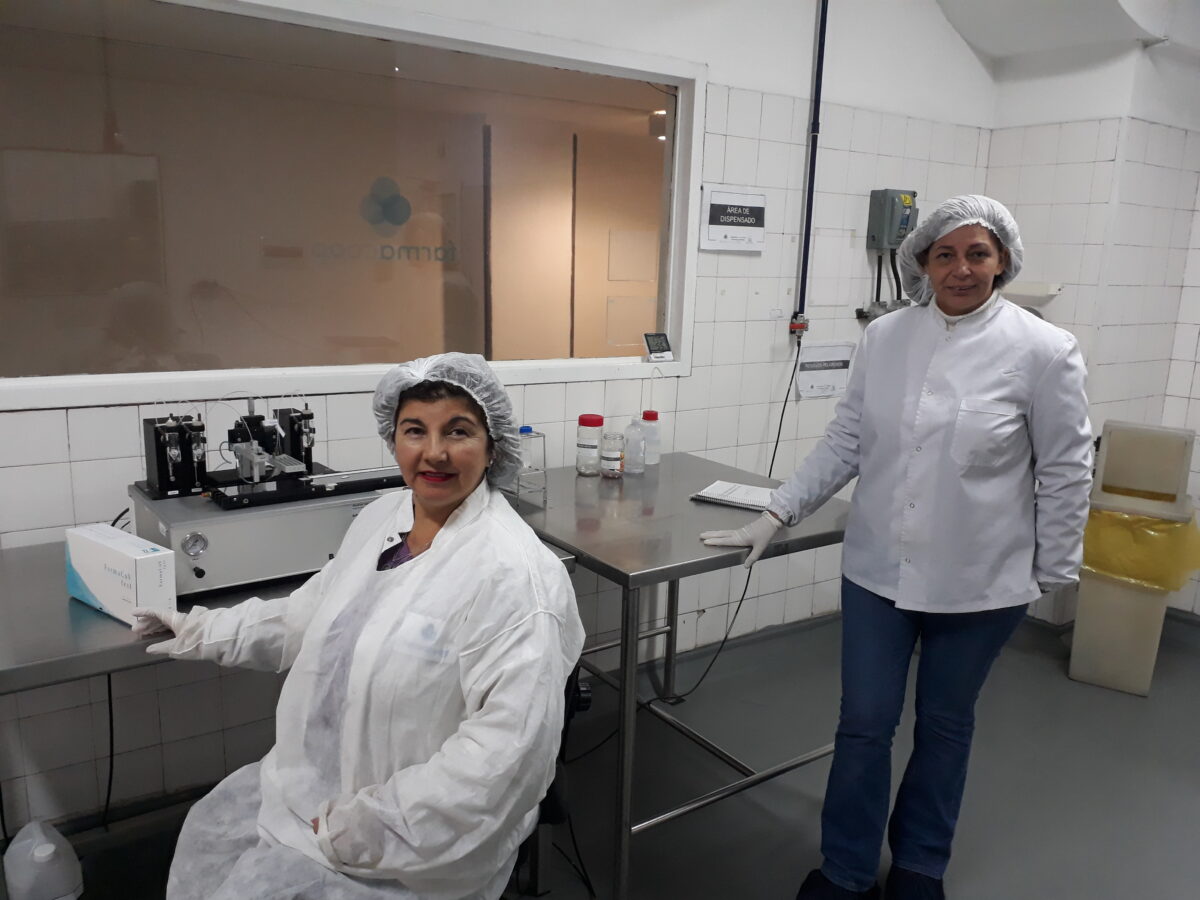 Edith Pereira (seated) and Blácida Benitez, two of the members of Farmacoop, a laboratory recovered by its workers in Buenos Aires, are seen here in the production area. This is the former Roux Ocefa laboratory, which went bankrupt in the capital of Argentina and was left owing a large amount of back wages to its workers. CREDIT: Daniel Gutman/IPS

The event was led by President Alberto Fernández, who said that he intends to “convince Argentina that the popular economy exists, that it is here to stay, that it is valuable and that it must be given the tools to continue growing.”

Fernández said on that occasion that the movement of worker-recuperated companies was born in the country in 2001, as a result of the brutal economic and social crisis that toppled the presidency of Fernando de la Rúa.

“One out of four Argentines was out of work, poverty had reached 60 percent and one of the difficulties was that companies were collapsing, the owners disappeared and the people working in those companies wanted to continue producing,” he said.

“That’s when the cooperatives began to emerge, so that those who were becoming unemployed could get together and continue working, sometimes in the companies abandoned by their owners, sometimes on the street,” the president added. 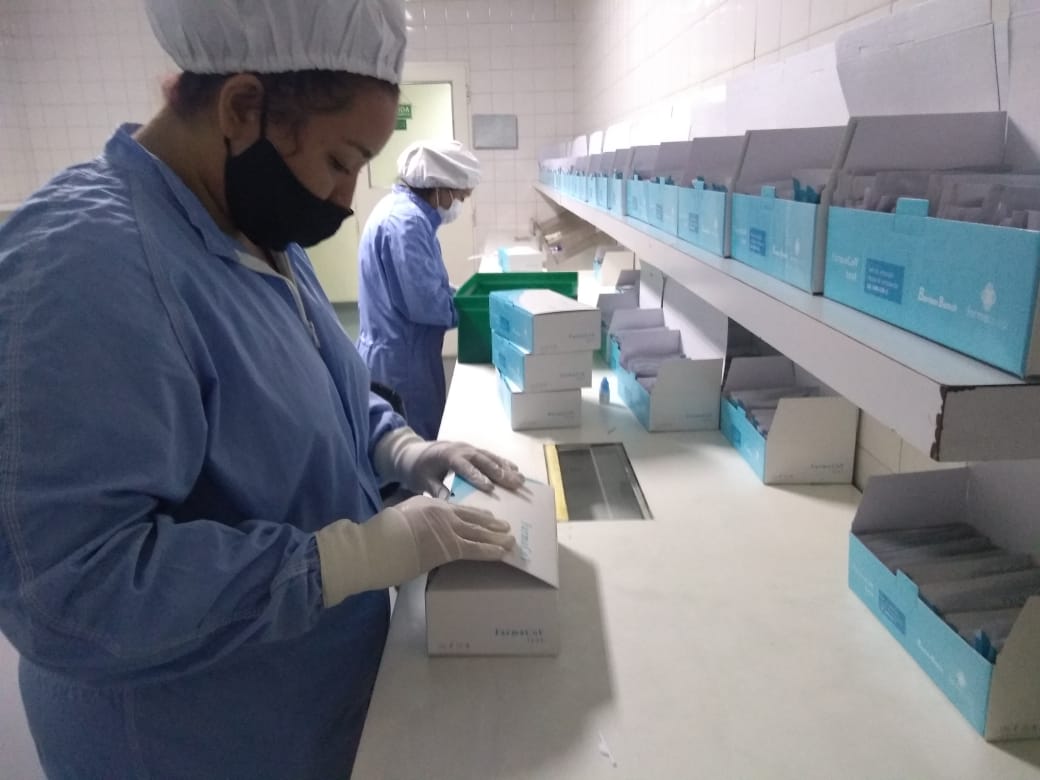 Two technicians package products at the Farmacoop laboratory, a cooperative with which some of the workers of the former bankrupt company undertook its recovery through self-management, a formula that is growing in Argentina in the face of company closures during successive economic crises. CREDIT: Courtesy of Farmacoop

More than 20 years later, this South American country of 45 million people finds itself once again in a social situation as severe or even more so than back then.

The new century began with a decade of growth, but today Argentines have experienced more than 10 years of economic stagnation, which has left its mark.

Poverty, according to official data, stands at 37 percent of the population, in a context of 60 percent annual inflation, which is steadily undermining people’s incomes and hitting the most vulnerable especially hard.

The latest statistics from the Ministry of Labor, Employment and Social Security indicate that 12.43 million people are formally employed, which in real terms – due to the increase of the population – is less than the 12.37 million jobs that were formally registered in January 2018.

“I would say that in Argentina we have been seeing the destruction of employment and industry for 40 years, regardless of the orientation of the governments. That is why we understand that worker-recovered companies, as a mechanism for defending jobs, will continue to exist,” says Bruno Di Mauro, the president of the Farmacoop cooperative.

“It is a form of resistance in the face of the condemnation of exclusion from the labor system that we workers suffer,” he adds to IPS. 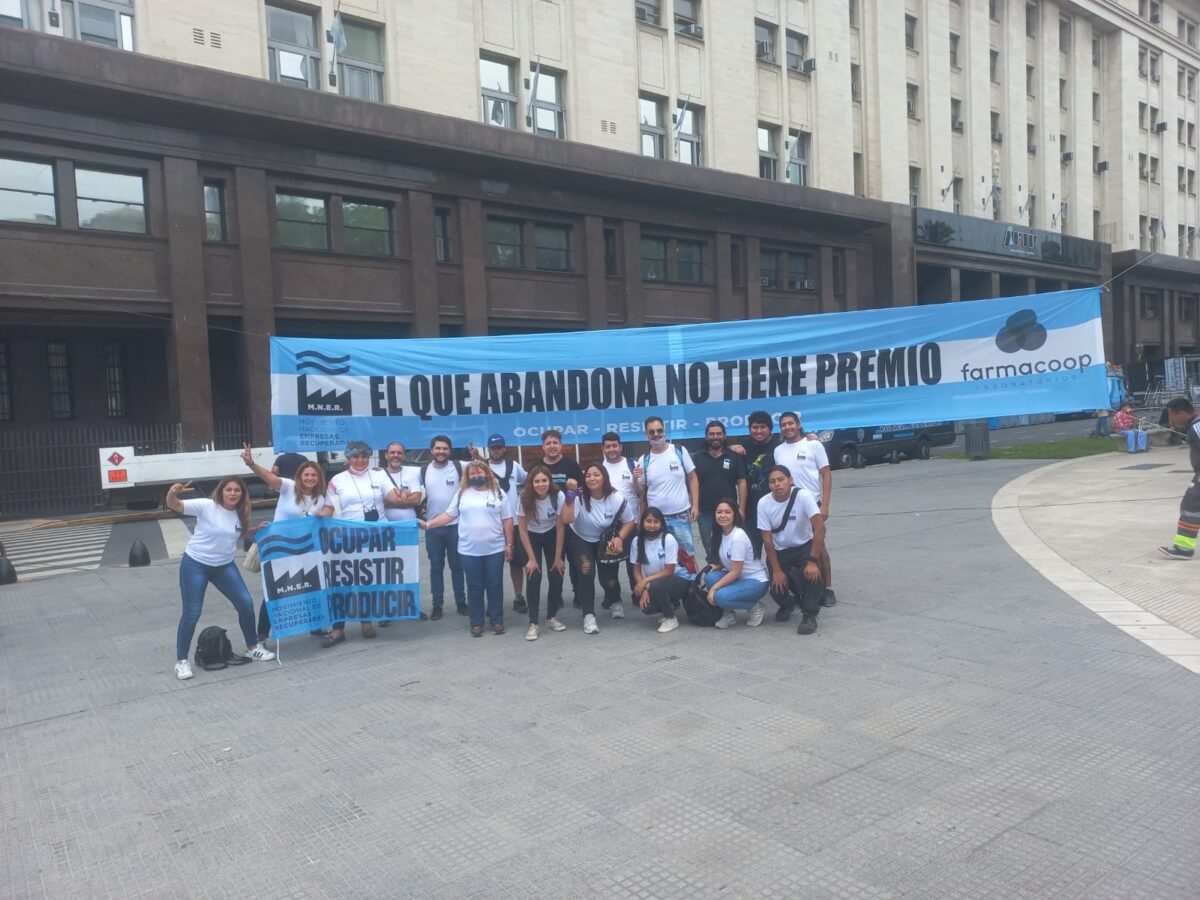 “He who abandons gets no prize” reads the banner with which part of the members of the Farmacoop cooperative were demonstrating in the Plaza de Mayo in downtown Buenos Aires, during the long labor dispute with the former owners who drove the pharmaceutical company into bankruptcy. The workers managed to recover it in 2019. CREDIT: Courtesy of Bruno Di Mauro/Farmacoop.

Today Farmacoop has three active production lines, including Aqualane brand moisturizing cream, used for decades by Argentines for sunburn. The cooperative is currently in the cumbersome process of seeking authorizations from the health authority for other products.

“When I look back, I think that we decided to form the cooperative and recover the company without really understanding what we were getting into. It was a very difficult process, in which we had colleagues who fell into depression, who saw pre-existing illnesses worsen and who died,” Di Mauro says.

“But we learned that we workers can take charge of any company, no matter how difficult the challenge. We are not incapable just because we are part of the working class,” he adds.

Farmacoop’s workers currently receive a “social wage” paid by the State, which also provided subsidies for the purchase of machinery.

The plant, now under self-management, is a gigantic old 8,000-square-meter building with meeting rooms, laboratories and warehouse areas where about 40 people work today, but which was the workplace of several hundred workers in its heyday.

It is located between the neighborhoods of Villa Lugano and Mataderos, in an area of factories and low-income housing mixed with old housing projects, where the rigors of the successive economic crises can be felt on almost every street, with waste pickers trying to eke out a living. 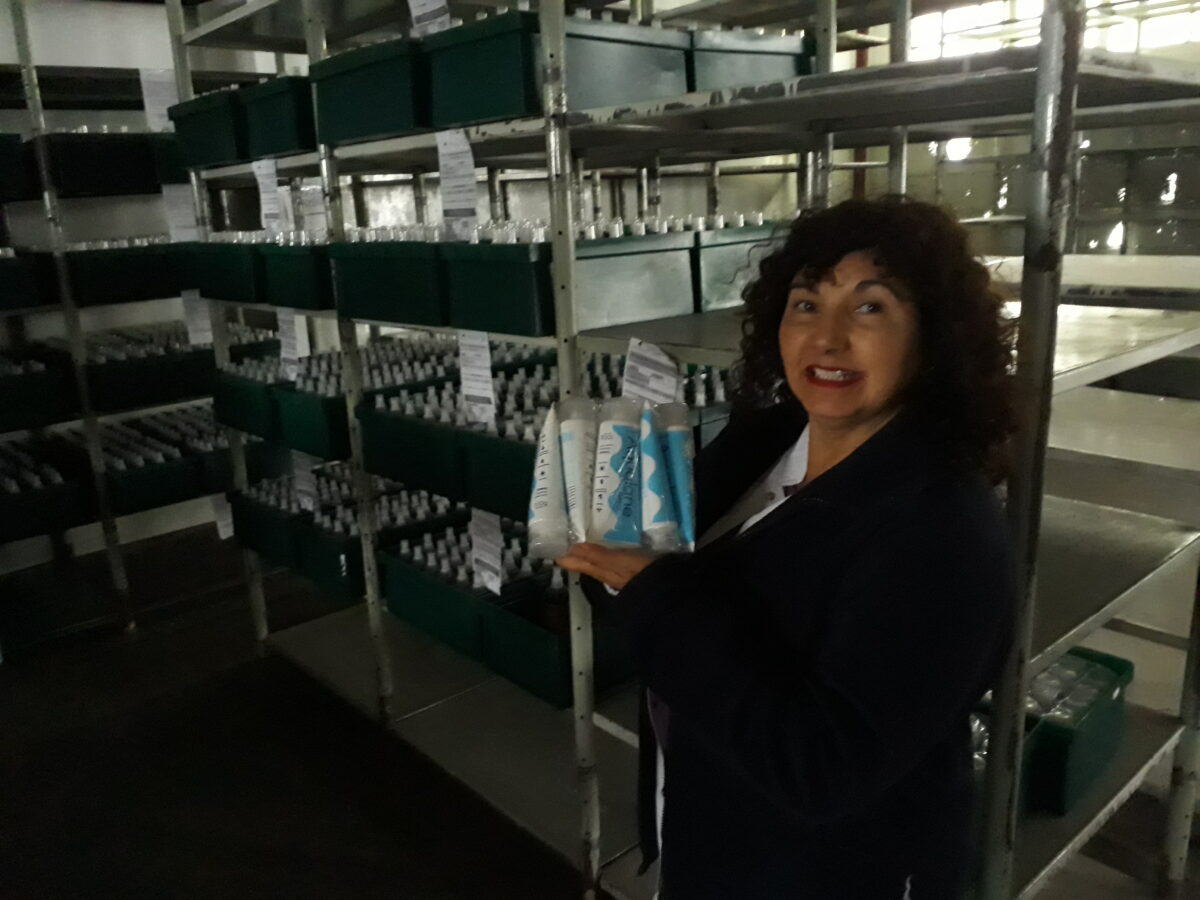 Edith Pereira shows the Aqualane brand moisturizing cream, well known in Argentina, that today is produced by the workers of the Farmacoop cooperative, which has two industrial plants in Buenos Aires, recovered and managed by the workers. CREDIT: Daniel Gutman/IPS

“When we entered the plant in 2019, everything was destroyed. There were only cardboard and paper that we sold to earn our first pesos,” says Blácida Martínez.

She used to work in the reception and security section of the company and has found a spot in the cooperative for her 24-year-old son, who is about to graduate as a laboratory technician and works in product quality control.

A new law is needed

Silvia Ayala is the president of the Mielcitas Argentinas cooperative, which brings together 88 workers, mostly women, who run a candy and sweets factory on the outskirts of Buenos Aires, where they lost their jobs in mid-2019.

“Today we are grateful that thanks to the cooperative we can put food on our families’ tables,” she says. “There was no other option but to resist, because reinserting ourselves in the labor market is very difficult. Every time a job is offered in Argentina, you see lines of hundreds of people.”

Ayala is also one of the leaders of the National Movement of Recovered Companies, active throughout the country, which is promoting a bill in Congress to regulate employee-run companies, presented in April by the governing Frente de Todos.

“A law would be very important, because when owners abandon their companies we need the recovery to be fast, and we need the collaboration of the State; this is a reality that is here to stay,” says Ayala. 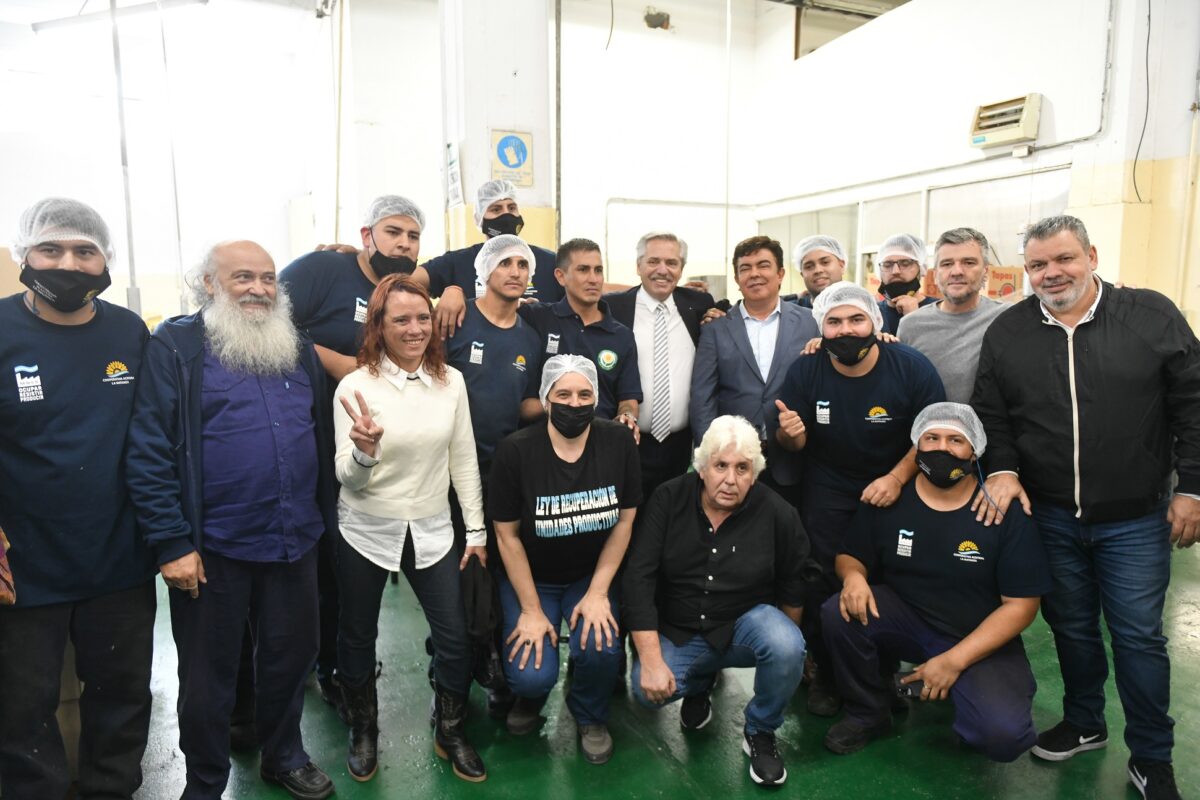 Argentine President Alberto Fernández stands with workers of the Cooperativa Aceitera La Matanza on May 5, when the government presented the Registry of Recovered Companies, which aims to formalize worker-run companies. CREDIT: Casa Rosada

The Ministry of Social Development states that the creation of the Registry is aimed at designing specific public policies and tools to strengthen the production and commercialization of the sector, as well as to formalize workers.

The government defines “recovered” companies as those economic, productive or service units that were originally privately managed and are currently run collectively by their former employees.

Although the presentation was made this month, the Registry began operating in March and has already listed 103 recovered companies, of which 64 belong to the production sector and 35 to the services sector.

The first data provide an indication of the diversity of the companies in terms of size, with the smallest having six workers and the largest 177.