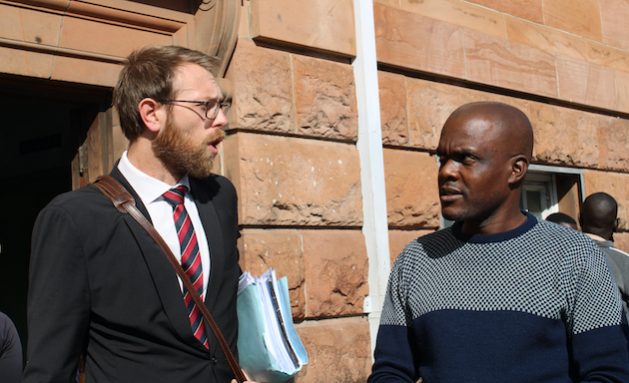 Journalist Jeffery Moyo, with his lawyer, Doug Coltart, outside the Magistrate’s Court, Bulawayo, Zimbabwe. Moyo faces charges of violating Section 36 of the Immigration Act. His sentencing is expected on May 31, 2022. Credit: Busani Bafana/IPS

Bulawayo, Zimbabwe, May 9 2022 (IPS) - For international journalist Jeffery Moyo, doing his job could land him in prison if Zimbabwe authorities have their way.

“Journalism is a crime in Zimbabwe, and the regime is reactive to independent journalism,” says Moyo, an international correspondent for the New York Times and the Inter Press Service (IPS).

Moyo (37) has been charged with violating Section 36 of the Immigration Act, based on allegations he made a false representation to immigration officials. This pertains to the accusation of him obtaining media accreditation for two of his colleagues, Christina Goldbaum and Joao Silva, from the New York Times. He faces ten years in jail if convicted of breaching Zimbabwe’s Immigration Act by helping two US newspaper journalists work in the country.

Arrested in May 2021 and detained for 21 days at Bulawayo Prison before being released, Moyo was initially denied bail on the grounds he was a threat to national security.

“I am living in perpetual fear because I don’t know what the regime is plotting against me,” Moyo told IPS in an interview before he was due in court in Bulawayo. “If you are an independent journalist in Zimbabwe, you should always watch your back because somebody might be following you intending to harm you because of your work.”

Moyo lamented that his continued now year-long court ordeal has meant he has little productive time doing his job, which means lost income.

“Any regime that projects itself in this manner has skeletons in its closet. I fear they might at some point harm me at a time the world would have forgotten about me because this is a regime that sees shadows everywhere around itself,” Moyo added.

The journalist’s trial resumed at the Bulawayo’s Magistrate Court last week after the State rejected an application to dismiss his case early this year. The trial started in the week that the world commemorated World Press Freedom Day.

Moyo was charged with contravening a section of the Immigration Act and that he had produced fake media accreditation cards for the New York Times journalists. The defence had applied for the case discharge noting that the State’s case against Moyo was on “shaky grounds”, but a Bulawayo Magistrate ruled that the State had sufficient evidence against Moyo. The court sought to cross-examine Moyo, and he chose to remain silent.

Moyo’s lawyer, Beatrice Mtetwa, told the court that her client chose to remain silent because the Magistrate had already found that the accreditation cards were fake without referring to any evidence on which the application for dismissal was based.

Mtetwa commented that whether or not Moyo testified, the Magistrate had decided that the accreditation cards Moyo allegedly obtained for two foreign journalists were fake and wanted Moyo to implicate himself – which is against the law.

“He [Moyo] had no onus to testify, and the Constitution says you have a right to remain silent and even the attempt to put questions to someone who has said ‘I wish to remain silent’, for me, is an exercise in futility. If he wants to find him guilty, let him find him guilty on the evidence that the State has led, which in his ruling he (the Magistrate) has completely ignored,” Mtetwa told IPS.

Zimbabwe has enshrined freedom of the press in its Constitution, but media advocacy groups say freedom is not guaranteed.

The media rights advocacy group, Media Institute of Southern Africa (MISA) Zimbabwe, recorded at least 27 violations in 2021, a decline from the 52 a year earlier.

“When the Constitution is violated, especially by the police who are supposed to enforce the law, then it presents a challenge … to uphold the constitution,” said Tabani Moyo, MISA Zimbabwe Executive Director. He added there was a need for continued consultation with law enforcement agencies in Zimbabwe to come up with workable interventions to prevent harassment of journalists.

Despite the government’s commitment to promoting press freedom and the freedom of expression, the continued harassment of journalists and the muzzling of critics tells a different story.

The arsenal of punitive laws meant to restrict fundamental rights of free expression and association point to repression rather than the freedom that the Zimbabwe government espouses.

For example, Zimbabwe repealed the draconian Access to Information and Privacy Act (AIPPA). However, journalists are still harassed and threatened, casting a long shadow on the Zimbabwe government’s commitment to free expression.

“We no longer have serious cases where journalists are harassed, beaten up or killed in this country. What we have is a robust exchange of ideas with journalists,” Zimbabwe’s Deputy Minister of Information, Publicity and Broadcasting Services, Kindness Paradza, told a  World Press Freedom Day commemoration event in Bulawayo last week.

“There is a lot to celebrate in Zimbabwe because we have done away with AIPPA, which was a bad law. In its place, we have put the Freedom of Information Act, the Zimbabwe Media Commission Act,” said Paradza. He added that the Zimbabwe Media Practitioners Bill is also on the cards.

The World Press Freedom Index notes that there has been an opening of the media landscape in African countries like Angola, Ethiopia and Zimbabwe, which moved seven points down the Index ranking from 130 in 2021 to 137 in 2022.

“The media situation in Zimbabwe has improved slightly since the dictator Robert Mugabe’s ouster in 2017. Access to information has increased, and self-censorship has declined,” the Index observed in an analysis of Zimbabwe’s press.

The Index noted that while levels of violence against journalists had declined significantly under the Mnangagwa administration, they remain alarmingly high, and self-censorship is routinely practised to avoid reprisals.

“Acts of intimidation, verbal attacks, and threats (especially on social media) are all still common practices. Cases of journalists being imprisoned and prosecuted are nonetheless now rarer, the most notable case being that of Hopewell Chin’ono, an investigative journalist who spent almost a month and a half in prison in 2020,” according to the World Press Freedom lndex.

Extremely harsh laws are still in effect, and, when new laws have been adopted, their provisions are just as draconian as those they replaced, the Index noted, citing that the amended penal code,  the Official Secrets Act and the new Cyber Security and Data Protection Act continue to hamstring journalism in Zimbabwe.

“We have had many, many journalists arrested under the second republic. Why is this happening? They are abusing the criminal justice system to harass journalists,” Mtetwa told IPS.

“They arrest you and look for something in the criminal law, knowing there is no case. You have seen the Hopewell Chin’ono cases,” she says. Two of the cases against Chin’ono have been dismissed, but one case is still awaiting a trial date. He denies the charges.