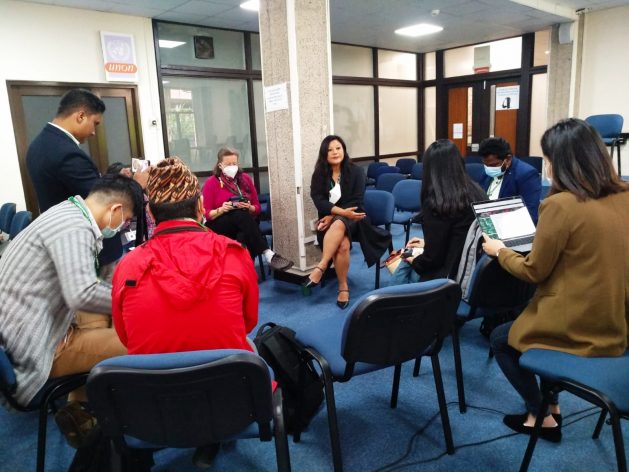 Mrinalini Rai, head of Women4Biodiversity and leader of the Women’s Caucus at the UN Biodiversity Convention and Cristina Eghenter of World Wildlife Fund for Nature, at a media roundtable at the ongoing UN CBD Working Group 4 meeting in Nairobi. Credit: Stella Paul/IPS

Nairobi, Jun 24 2022 (IPS) - “I often hear, ‘What do women have to do with biodiversity?’ And I want to ask them back, ‘What do men have to do (with biodiversity)?’,” says Mrinalini Rai, a prominent gender equality rights advocate at the 4th Meeting of the Open-Ended Working Group of the UN Biodiversity Convention, which started this week in Nairobi.

Her comment appears to reflect the frustration women activists feel as their demand for a specific target on gender equality – known as Target 22 – shows few signs of progress.

Target 22 was first submitted last September at the 3rd meeting of the Open-ended Working Group (OEWG) of the post-2020 global biodiversity framework (GBF) in Geneva. The target, when summarized, proposes to “ensure women and girls’ equitable access and benefits from conservation and sustainable use of biodiversity, as well as their informed and effective participation at all levels of policy and decision making related to biodiversity.”

The target was proposed officially by Costa Rica, with the support of GLURAC – a group comprising 11 countries from Latin America and West Africa which has been since accepted as a point of discussion by the CBD. The GRULAC members are Guatemala, Argentina, Dominican Republic, Mexico, Chile, Cote d’Ivoire, Ecuador, Togo, Benin, Cameroon, and Tanzania.

However, this week in Nairobi, when asked by IPS for their comments on Target 22, the co-chairs of the CBD appeared largely dismissive. “We already have a Gender Action Plan,” said Basile Van Havre – one of the two co-chairs, implying little importance or need for a standalone target.

Unsurprisingly, the draft remains a barely-discussed target on Friday – two days before the current meeting ends.

Gender in Biodiversity and Drafting of Target 22

Ratified by 200 nations, the Convention on Biological Diversity (CBD) is the first legally binding global treaty. It has three main goals: conserve biological diversity, promote sustainable use of its components, and attain fair and equitable sharing of the benefits derived from the utilization of genetic resources.

The convention’s 14th Conference of the Parties, held in Sharm-el-Sheikh, Egypt, in 2018, adopted a decision to develop a new biodiversity framework that builds on the CBD’s 2011-2020 strategic plan known as “Aichi Biodiversity Targets”. The decision also includes “a gender-responsive and gender-balanced process for the development of the post-2020 global biodiversity framework”.

However, while a lot of progress has been made since 2018 on crafting and shaping the targets for the Post-2020 Global Biodiversity Framework (GBF), the Convention has yet to truly center gender issues. Of the 21 targets within the draft Framework, only one target mentions women, and no single target refers to gender. Some parties have stated that since the Gender Plan of Action (GPA) will complement the Framework, there is no need for a standalone target on gender. Feminists and gender equality advocates, however, believe it is critical to have strong integration of gender within the Framework itself to anchor and give life to the Gender Plan of Action.

“What we are saying is that this target is not supposed to be seen as something separate from everything in the GBF. When you adopt a standalone target on gender equality, it will guide all the work being done under the framework and to operationalize the framework including the communications, knowledge management, capacity building and financing of the new mechanism”, says Rai.

Cristina Eghenter, Global Governance Policy Coordinator at World Wildlife Fund for Nature (WWF) links the currently lacking gender-segregated data and how the adoption of Target 22 could help plug the gaps.

“Women’s contribution to biodiversity is often questioned because this contribution is underreported and therefore, undervalued. A standalone target on gender equality would lead to the setting of clear indicators and a monitoring system which would then contribute to the production of gender-segregated data,” Eghenter points out.

Gaining support from other advocacy rights and equity groups 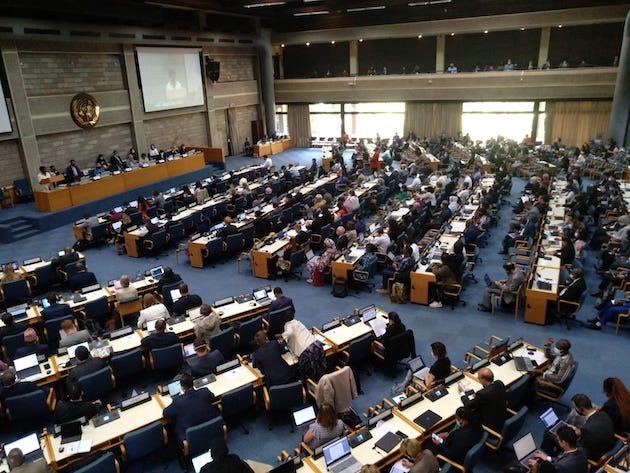 Jennifer Corpuz leads the International Indigenous Forum on Biodiversity (IPFB) – a collection of representatives from indigenous governments, indigenous non-governmental organizations, and indigenous scholars and activists that organize around the Convention on Biological Diversity (CBD).

On being asked her stance on a standalone, specific target on gender equality, Corpuz says that she wholeheartedly supports this. “When the GBF has included target 21, it is a natural progression that there should be a target 22”. Corpuz also explains that  Target 21 – the only target to mention women in the GFB, emphasizes indigenous communities and therefore, it will be more helpful to have a standalone target on gender equality that goes beyond women and is inclusive of all genders.

“We, therefore, strongly support Target 22 and hope it will be taken up for adoption at COP15,” she says.

Besides, IIFB and WWF, several other rights and equity advocacy groups are supporting the proposed new target. The Global Youth Biodiversity Network – an advocacy group that is demanding greater focus on youths in the GBF, also has voiced its support for a target on gender equality. Other groups lending their support are the UN Office of the High Commissioner on Human Rights (OHCHR), the Convention on Biological Diversity Alliance (CBDA), and the Women Caucus at the UNCBD.

As the Nairobi meeting nears its end – the conference will close on Sunday – there are more meetings of the contacts groups which oversee discussing and finalizing the text of the draft GBF with the negotiation in each meeting turning more intense. However, when it comes to Target 22 – the contact group 4, responsible for discussing and cleaning up the text of both targets related to gender, has had only one reading of the Target 22.

According to Benjamin Schachter, Human Rights Officer on Climate Change and Environment at ORCHR, the text of the target 22 is right now ‘full of brackets’ which indicates there is hardly any agreement among the contact group members discussing the target on its content.

As the GBF is expected to have at least 80% of ‘clean text’ before it is presented by CBD to the parties for discussion and adoption, the question that most people are wondering is if the draft GBF at COP15 includes a target for gender equality at all? Some are even asking if the draft in its current form (full of brackets) can be rejected by the parties altogether if they feel the task to clean it up is too arduous?

Total exclusion is ‘extremely unlikely,’ explains Schafter, explaining the technical process: since the target has been officially proposed by a group of parties and discussed at the contact group, the parties must work harder and get the draft to a shape where it can be considered for consensus building and eventual adoption.

A long way to Montreal

The onus, then, lies equally on parties as well as on groups such as Women4Biodiversity to lobby more parties and gain their support. Already, in the Nairobi meeting, a few more countries including Maldives, Norway, and the EU have expressed their support, taking the total number of supporting parties to 22.

Norway has, in fact,  also proposed an alternative text for the Target which reads “Ensure gender equality in the implementation of the global biodiversity framework and the achievement of the 3 objectives of the convention including by recognizing equal rights and access to land and natural resources of women and girls and their meaningful and informed participation in policy and decision-making”

“This language is both cleaner and stronger”, says Schachter.

Mrinalini Rai of Women4Biodiversity agrees: “Norway proposed and supported by American countries a new way to address the rights of gender equality and rights of women to lands and natural resources which is a fantastic improvement and if this new text comes in, it would be monumental step forward for CBD,” she says.

But can the advocates and supporters get 108 remaining countries to read, give input and prepare themselves for an informed discussion in the next five months? Undoubtedly, that remains an arduous task for the nations, requiring manpower, time, and resources.

The Target 22 advocates appear well aware of the challenge ahead: “It is going to be a long road to Montreal,” says Ana di Pangracio of the Convention of Biodiversity Alliance (CBDA).